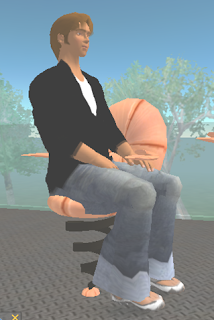 I wandered into Second Life last night and took the opportunity to check out what was going on, and the picture I have included here is of my avatar, RT Writer. Earlier this year I had attended a vendor event where there were a number of demonstrations of Second Life and I have become a casual participant in this virtual community. I really like the opportunity it gives me to fly over islands and be teleported between them.

The whole concept of a virtual community intrigues me, as does the investment some corporations are making. Last night I wondered onto an IBM island – the picture is of me at an IBM Australia site – and continue to be highly impressed by the number of islands IBM owns. I even boarded a motor yacht, the Palmisano, located between IBM island’s 7 and 8 and took a leisurely stroll through its interior.

Second life is one of a growing number of virtual communities, and the trick with creating these worlds is to make sure that you have a rich enough experience that you really do look forward to returning. It’s still early days, and the technology has a ways to go, but I can imagine a time in the not-too-distant future where more and more business will be conducted within these virtual worlds. It’s not something I want to encourage just yet, but I can see a time when participation in a virtual user community becomes a viable alternative as well.

For those managing data centers, there is a huge push to consolidate the servers. The economics from simple server consolidation are overwhelming – not just because of the hardware savings that come with better economies of scale, but because we can better manage and automate energy consumption, as well as more effectively secure, the resultant configurations. Simply put, less moving parts, less opportunities to infiltrate.

It is not just server consolidation however, the very building blocks that make up the engines within these servers is changing as well as we welcome a whole new world of multi-core processors. Layered two-way, four-way, whatever, these powerful multi-core processors really do need a layer of abstraction between them and traditional operating systems. We need to move to a technology that hides the rapid advancements going on at the hardware level, without forcing us into constant, expensive, operating system upgrades.

As I researched this topic I was particularly interested in a couple of statements I came across on Wikipedia on the topic of virtualization. These included “a technique for hiding the physical characteristics of computing resources from the way in which other systems, applications, or end users interact with those resources.”

Wikipedia also stated that “the common theme of all virtualization technologies is the hiding of technical detail, through encapsulation. Virtualization creates an external interface that hides an underlying implementation.” Finally, “platform virtualization is performed on a given hardware platform by host software (a control program), which creates a simulated computer environment, a virtual machine, for its guest software. The guest software, which is often itself a complete operating system, runs just as if it were installed on a stand-alone hardware platform.”

All the signs are there that, as the new bladed-architecture rolls out, it will have the ability to run many HP supported operating systems. And for me, just as importantly, there will be a layer of virtualization, or hypervisor, sandwiched between these operating systems and the multi-core processors.

HP will have virtualization options – indeed, they already support a number of third party offerings on their other platforms – and it is just not an IBM-only feature as I recently read. HP, Microsoft, and even SUN following its announcement of a $2 Billion commitment to virtualization at last month’s Oracle OpenWorld, will all support virtualization one way or the other. Earlier this year InfoWorld quoted a Forrester report that said “fifty-one percent of North American companies are either testing virtualization technology in their data centers, or have already deployed it.” I just have to believe that virtualization options for the NonStop user will most likely begin to appear sometime late in 2008.

For more than a year we have seen HP product managers’ present slides showing a mock-up of a proposed future bladed-architecture server where, overlaid in different colors, they present an image of a multi-racked tower supporting a mix of NonStop, HP-UX, Linux, and even NT. It is clear to me that this will be a lot more than just a simple hybrid and that by the end of 2008, you will be able to consolidate any number of HP-supported OS’s using HP’s own virtualization product offerings.

And why stop at HP-supported OS’s?

What’s grabbed my attention recently is that Platform Solutions, Inc (PSI) of Sunnyvale, CA, has released a new server line - the PSI System64™ Open Mainframe™ Servers. On the front page of their web site (http://www.platform-solutions.com/index.php/) is a description of their Open Mainframe Servers, where you can read that these are “Intel Itanium2 based Mainframe servers for z/OS. System64 Provides PCM compatibility for z/OS and mainframe applications, general purpose engines for Windows, Linux, and HP-UX, and device virtualization for bridging mainframe and distributed architecture worlds.”

This year I saw for myself their prototype running on a “run of the mill” HP SuperDome with HP-UX, NT, and zOS all running. So it’s not a big stretch to anticipate this becoming an option with the new bladed-architecture servers as well. Why would you want to do this? For some corporations, it may make commercial sense to include them in any planned server consolidation as well. This is not to promote the HP’s bladed-architecture servers as a replacement for IBM System z mainframes, but just as an option for those corporations keeping a mainframe around just to run a few legacy applications.

Right now, PSI and IBM are sorting out their differences, and it wouldn’t surprise me at all to see a zOS option become available on HP bladed-architecture servers, co-existing alongside of NonStop, Linux, HP-UX, and NT. While the outcome of any legal squabbles cannot be accurately predicted these days I have to admit that from all I have read, PSI has a good story – much of the heritage stems from their former days as a business unit within Amdahl I recall.

However, the real power and flexibility from running multiple OS’s in a single bladed-architecture server only comes when they are plugged in on top of a hypervisor – a layer of virtualization spanning all the blades. Logically assigning computer power to the respective guest OS’s, and automated so that the incoming transaction streams can be analyzed, and the right balance maintained between the different OS’s, makes all the sense in the world to me. Oversight would come from a single integrated management console tied in directly to the hypervisor, operators both manual and automated, would have full visibility to the guest OS’s.

I have no insight into HP’s development plans in this area nor have I been the recipient of any inside scoop here. I have only been to the same public presentations as everyone else. But I am convinced that HP is headed down this path and I am just as convinced that they will produce a full-featured hypervisor either from a partner or internally developed, and that the flexibility offered will be unlike anything we have ever dealt with before.

I remain just as excited by where this is all headed, and can only imagine what innovative business solutions will appear as a result. Platform virtualization will not allow me to fly, as I can do as an avatar, or be teleported to different lands, but unlike the time I spend in Second Life the impact on my business will be way more impressive!
By Richard Buckle - December 19, 2007