It's still the same, just different! 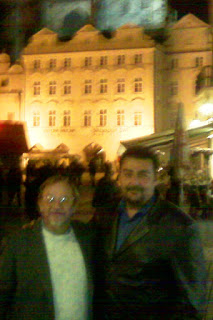 I have just returned from Prague after spending a couple of days there with folks from GoldenGate and HP. As I mentioned previously, this is one of my favorite cities and I really enjoy any opportunity to visit there. On the evening of the last day, we even had time to go down to the old town – and the picture I include here is of me and Sami Akbay, GoldenGate’s Marketing VP, taken by Scott Healy, GoldenGate’s Industry Solutions VP and the current ITUG Chairman.

Sami only joined us the day before, after the most miserable trip ever, from his perspective. He was in Cairo and planned a routine visit to Prague, via London, with BA. He checks out of the hotel, elects not to use the hotel’s Mercedes, and jumps into a taxi. As he heads for the Cairo airport, he asks the driver for a receipt, and then it all goes horribly wrong. The driver didn’t carry receipts so he headed back into the city to get them, but in the process found time to take a twenty minute coffee break! After a madcap rush back to the airport, Sami missed his flight!

BA customer service couldn’t tell him when he would be on another BA flight, as London took two days to respond to telexes, and no, they weren’t allowed to use the phone. The phone number they eventually provided Sami was no longer in service. Sami had an e-ticket so he used his cell to call our corporate travel partner to get him on a flight to Pragueand a return flight back home to San Francisco, which the agent duly assembled. With all of Sami’s travel information online in the travel data base, the agent was quick to respond. Sami would now be routed through Vienna and, as long as he was prepared to return to the US on Lufthansa via France, everything would be OK. “Why France,” asked Sami, “is this a code-share flight?” It appears that, in some circles, the airport code of FRA now means the country France, and is no longer a reference to the airport at Frankfurt, despite Sami’s protests! Out of sheer frustration, Sami demands: “just ticket me, and get me on the flight to Vienna! I will figure out the route later.” As he told us later, facing the possible option of not leaving Cairo at all, he really had no choice!

At last, Sami had a flight but, as this new plane joined the line for take-off, it came to a stop and taxied to one side. It had lost power from one engine. The ground engineers were dispatched and began to work on it, and eventually the pilot broke the bad news – they needed a part to be flown in. Four hours later, and having remained on the plane the whole time – yes, they opened the door but didn’t provide any stairs – they ready. But not quite, as one of the trucks that had brought the engineers to the plane parked across the front of it, left its headlights turned on, and drained the battery. The truck couldn’t be started and just stood there, blocking the path of the plane and effectively preventing it from being moved in any direction. It was another hour before the truck could be towed away and Sami could leave Cairo. The plane landed in Vienna well after the connecting flight to Prague had departed, forcing Sami to spend the night holed up at an airport hotel. As Sami walked into our hotel, a day late and very much the worse for wear, we all found something else to do as it was very clear he was looking to sacrifice something and we were not sure if it was one of us that would become the target of his wrath!

Electronic tickets, or e-tickets, have really taken off. USA Today this week reported that “it has been a rapid decline for paper tickets. By the end of this year, more that 99% of airline tickets issued by travel agents will be electronic.” Frequent flyers quoted in the article reported that they were “totally against the use of e-tickets when they first came out” as they wanted “concrete evidence” of their flight. One traveler went so far as to say “with computer glitches, I didn’t have the confidence that the airline would have a record of my flight!” But now, with e-tickets, airline operators and their agents, “make faster changes to passenger itineraries.” Sami was definitely a benefactor of this process, and its not all that clear to me whether or not he would still be in Cairo if it wasn’t for the flexibility today’s e-tickets provide.

I was very much reminded of all of this – the initial uncertainties that came from no longer having paper tickets, and the fear of computer glitches remaining an ever-present concern. While it’s a lot better, it’s still not perfect with many check-in kiosks still unable to provide boarding passes to those who purchased e-tickets at the last minute. There’s still a need to connect all of the infrastructure in real time. Unfortunately, it’s still an all-too-frequent site to see complete rows of kiosks not working. On my last trip out of Orlando, a week or so back, I had to return to the check-in lines as the kiosks couldn’t print a boarding pass!

We came to Prague to catch up with HP BCS folks and we had the good fortune of catching a presentation by Neil Pringle. Working a different crowd to that which we were normally accustomed, Neil began by quoting the famous England soccer player, Kevin Keegan. “Gary always weighed up his options especially when he had no choice!” was his first slide. This was the same inspirational England manager who once said “I don't think there's anyone bigger or smaller than Maradona” as well as the well articulated observation “that decision, for me, was almost certainly definitely wrong.”

The US and indeed Australia, have rich traditions surrounding professional sporting leaders who, when facing a television audience, somehow didn’t quite get the message across. Perhaps none was better at this than former Australian Rugby great, Rex Mossop, when he said “let me reiterate back to what I was saying previously”. Of course, the best known of all was Yogi Berra and his best attempt at clarifying his goals and directions for his team came out: “If you don't know where you're going, chances are you will end up somewhere else.”

Being presented with mixed, and frequently unclear messages, and with directions that are difficult to follow, will become more routine in the future. So much of what we want to do today is online, and with it being online we will continue to push harder on the underlying technical capabilities. We book airline tickets and trust the infrastructure in place will notify all the parties. We make hotel reservations, we add cars, and we even make restaurant reservations adding requests for flowers to be delivered to the table. The sheer volume and complexity of it all is, for the most part, hidden from the users. But we know what transactions will be generated. We know of the many disparate servers that will be involved. And even though we really do believe the odds of having everything turn out perfectly are pretty high, we just worry a tad anyway.

If you have any uncertainty about this growth then just look at the size of files and data bases we routinely have to deal with. The data bases, and the disk drives supporting them, are growing exponentially. Kryder’s Law says: “Since the introduction of the disk drive in 1956, the density of information it can record has evolved from a paltry 2000 bits to 100 billion bits (2005)”. This is a 50 million fold increase! But perhaps we really do need to see this capacity grow. At last years HPTF&E in Las Vegas, Anne Livermore told attendees that “more information will be generated over the next five years than in all previous history.”

Prague is a very pretty city having come through the wars of the 19th and 20th centuries unscathed. Its medieval architecture has been wonderfully preserved and, as the picture shows, we spent a lovely evening in the old town. As the only one familiar with the locale, I was very keen to show my mates the famous Charles Bridge over the Vitava river. Built back in the 14th century, its gothic form is well known throughout the world. Unfortunately, we never saw it as after leaving the center of the old town, I walked them both in a complete circle back into the center of the old town. I have no idea how I managed the feat, but in heading the three blocks to the river I was able to cover almost a mile before wheeling us back into the center square.

Listening to Sami’s ordeal in Cairo, being present as Neil Pringle quotes Mr Keegan on “weighing up his options”, and walking my friends around in circles, I was reminded of yet another of Mr Keegan’s famous quotes. Paraphrasing it to take into account our current situation in Prague, as indeed Neil himself had done earlier in the day, I was able to reflect on how “I came to (Prague, ten years) ago and it's much the same today, except that it's totally different.”

And this is the real challenge that I see – we are headed to where our world is increasingly shifting to being online and real time. Yes, it’s the same as it has been for some time, but now it’s a whole lot different. Today we make fun of glitches and functions that go offline. But our frustration levels – indeed our anger thresholds - are beginning to break down as our tolerance for anything other than an accurate, reliably functioning technical infrastructure, is disappearing. While those of us familiar with NonStop see opportunities everywhere we turn, there’s still a long way to go before it is the first place we turn for solutions.

But if my experiences of the past week in Europe are any indication of where it’s all headed, I have to admit I feel a lot more confident about the future of NonStop. Technology is very much as I recall it, when I first started as a computer programmer, except that everything has changed.
By Richard Buckle - March 12, 2008