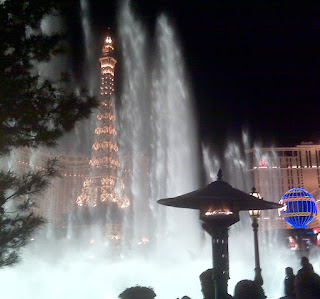 This past weekend was spent in Las Vegas. Only a short drive away from where I spend most of my time these days, here in Simi Valley, it affords the opportunity to put the routines of daily life to one side. And the picture I have included here is from the terrace outside of the Fountain Bar at the Bellagio Hotel just as the hotel’s famous fountains erupted into life against a backdrop that included the Eiffel Tower.

In Las Vegas, no limits have been put on the imaginations of the developers with as many innovative ways to draw an audience as there are establishments. And after only a brief time walking along Las Vegas Boulevard – the famous Vegas Strip – you pretty quickly stop being impressed with the way in which businesses pursue patronage. It’s so over the top, yet uniquely Las Vegas!

But the real town of Bellagio, alongside Lake Como in Northern Italy, could never have provided me with a view of the Eiffel Tower, just across the lake, or given me a glimpse of the Statue of Liberty a block or so away to my right. And I would never have guessed, of course, that only a short distance away the gondolas were ferrying patrons along the Grand Canal inside the Venetian hotel.

Only in Las Vegas!

There is no escaping the business of Las Vegas – it’s gambling, and the establishment’s casinos use their innovative approaches to draw you to their tables – blackjack, roulette, poker, whatever, it makes little difference as there’s practically no limit to the types of games on offer. The mix of offerings is constantly changing as the casinos try to cater to the latest fad. And with deer-in-the headlights stares, streams of patrons poor onto the casino floors anxious to get back into the game.

The weekend came after I had spent some time flipping through the pages of several business and technology magazines and it reminded me of articles I had only just finished reading. In Fortune Magazine (February 16, 09), there was a technology review where the writer quotes Mark Heesen, President of the National Venture Capital Association, as having said “the only way (venture capitalists can) get back into the game is by finding a game changer, a fundamental technology that will alter the existing IT structure.”

A little later in the same technology section, there was an update on WiMax deployments. The reporter made the observation on how “ubiquitous wireless broadband could be a real game changer!” The reporter then added “WiMax, with its ability to serve up broadband on the go, certainly could spark a fresh wave of innovation.”

From an older issue of the magazine, InformationWeek (February 2, ’09) I came across an interview of Yuvi Kochar, CTO and VP of Technology at Washington Post who advised future CIO’s that “innovation is the only sustainable competitive advantage!”

The messages of finding a game changer, pursuing innovative ideas and gaining an upper hand couldn’t have been better reinforced in any place other than in Las Vegas. After all, there was just no tolerance for me-too, same-o, same-o offerings of any kind; game-changing product differentiation is the only option for the businesses on the strip.

Before leaving Las Vegas I had breakfast at the Palazzo, wh 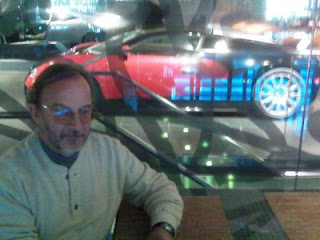 ere Lamborghini Las Vegas has opened a showroom as part of the hotel, with a restaurant overlooking the cars on display. The picture I have included here is of me relaxing over breakfast and, visible through the glass partition among the Lamborghini's, is a rare Bugatti Veyron – sixteen cylinders and four turbochargers of technology wrapped in an amazingly cool product!

And cool products are everywhere in Las Vegas! However, in a recent discussion I had with Sami Akbay, VP of Product Management and Marketing at GoldenGate we agreed that cool doesn’t have to be solely a technology or product innovation. "One of the coolest sneakers out there today is the Adidas 'Stan Smith'; it was first introduced in 1971 and it was recently reintroduced. When it was cool the first time around, the innovation was that it was the first fully leather tennis shoe with dimple sole and rubber cup outsole; now it is cool because of simplicity, function, and 'classic' effect." In other words, cool can also have a timing component and once-cool products can make a come-back!

Tandem Computers produced a cool product in the late ‘70s and it proved to be an immediate hit with customers who depended on technology for their business – stock exchanges, network switches (for ATMs, POSs, etc.) and even newspapers. Just as with the sneakers Sami talked about, there is strong evidence mounting that the NonStop server line we see today is just as cool as it ever has been.

But it is out of Oakland, California where a new business solution is emerging that really has me excited, as the company Modius ports their application onto NonStop. Modius provides a Data Center Infrastructure Manager (DCiM) product that is a “complete measurement and monitoring solution for generating a single, real-time view of all business critical facilities across the enterprise, including all major data centers, server rooms, branch offices, wiring closets, etc.” Check out http://www.modius.com/

For the first time, NonStop servers can be deployed as critical components to monitor everything to do with a data center facility – whether a single building, or just part of the facility, or the entire global enterprise. Every major data center in the world, and the count of these facilities climbs quickly into the thousands and tens of thousands, could witness a NonStop server overseeing it all.

What has me intrigued by the product offerings from Modius is that for many years I thought that this was a logical marketplace for NonStop, with few inhibitors to creating an enormous global presence. Every time a customer took me on a visit of their “flight deck” where the applications, systems, and networks were managed, I wondered why there hadn’t been an innovative engineer front-ending everything with a NonStop. Having first heard of Modius from HP BCS Marketing I was very pleased when HP helped set up a quick fact-finding call for me with Chris Palombi, VP of Sales and Marketing for Modius.

It became very clear that this was a potential game-changing marriage involving NonStop and his company. “This is clearly an attention-grabbing application where the solution makes a compelling argument for going with a NonStop server,” Chris promises. No more issues with configuring a network of servers to ensure high availability – the inherent N+1 redundant architecture at the core of NonStop makes a very persuasive argument – an absolutely mandatory requirement where the “availability” of the whole data center is at stake.

Facilities managers have been living with their building management systems for years and these have been extremely crude. To this user community it’s all about what the solution provides and not about the choice of operating system – it’s this group of managers who really feel the pressure should they ever run out of power, or fail to adequately cool, any facility. NonStop for these managers represents a bonus!

“Any attempts at optimization (of the data center) requires continuous monitoring and feedback (after a baseline is established), with real-time trend analysis just so important,” Chris went on to add. As I continued to listen to Chris, I heard that while CIO’s are committed to reducing the operational cost of their IT operations and to be seen embracing “green” strategies, nearly all of them lacked any real data on which to base decisions. Indeed, it’s probably the “worst-kept secret” in the industry that the data center remains the last bastion of gross waste!

The first installations of DCiM were on Windows, but today the application has been ported to NonStop and it’s just been installed at the HP Advanced Technology Center (ATC) in Cupertino. The first training session for sales and solutions architects was just completed earlier this month. And this is the type of application that can swing the game very much back in NonStop’s favor – the more I looked at what was being provided, the more I could see every prospect of a NonStop appearing in every data center. Tom Moylan, who heads up NonStop sales in the America’s, recognizes that HP is only just starting out with Modius but already there “seems like a high level of excitement from the sales teams; Modius is outstanding with sales resources and enthusiasm!”

Game-changing? Innovative? Cool? It’s still an early phase in the lifecycle of this solution. But it is sending a strong message that the NonStop platform is as viable today as it has ever been. And in today’s economy, as Chris reminded me, any solution that pulls money back from the top line, as this so easily demonstrates, just sees it growing on the bottom line – and this is about the only game that draws in the CIO crowd these days.

Thirty years ago, the Tandem set a new benchmark for cool and today, with what is now beginning to be rolled out – the simplicity (N+1 redundancy built in), the function (scalability and availability), and the classic (established, premier marketplaces) suggests that the once-cool NonStop is poised for a new era of cool-ness! And while it may be a bit tough on HP and Modius to compare such a new solution to a pair of 70s vintage sneakers, perhaps they both would welcome the same levels of market acceptance should it lead to a NonStop in every data center!
By Richard Buckle - February 18, 2009

Richard, I'm really interested in your post regarding Modius's partnership with HP. I'm an MBA student, doing an analysis on Modius and their industry. I'm trying to fully wrap my brain around how much of a game-changer their service truly is, and how valuable the partnership with HP will be to both parties. Any chance I can pick your brain? shoot me an email at jdcohen@umich.edu if you dont mind sharing your knowledge!