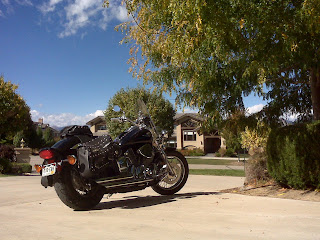 I had the very good fortune to spend two weeks back home in . It gave me the opportunity to revisit favorite spots in and around the town – and to catch up with old friends. Coming from Southern California I wasn’t quite prepared for the weather but then again, being exposed to seasons, has its attractions. And the photo here is of the bike parked beneath a tree in our garden that was putting on quite a show – fall in the is mostly about the color yellow!

But the coming of fall is not just about the display of colors, but about change. We saw days where the thermometer dropped as much as 30 degrees. One day it was 80+, the next barely 50! And the storms? On two occasions the continental divide glistened white with snow and one early morning, we were treated to one of the best electrical storms I have seen in years – lined up, one behind the other, weather fronts moved across the state with the regularity (and precision) of a metronome!

It was out of necessity that I also had to visit the local tire shop. The frequent driving between Southern California and was taking its toll on tires, brakes, and wheel alignments. Just as we experience problems within IT in “batches”, with rarely a single problem requiring our attention, so too did I find that I had two cars that needed new tires. And pretty badly – when measured tire tread depth returns a reading of 0mm’s then it’s time! And of course, it’s always good to try out new tires and to change to something different from what had been installed before!

I have often talked of change in these blog postings – it’s the one constant we all have to deal with. IT makes no allowances for our “comfort zones” and continues to throw new things at us – whether processors, storage, or software. And the rate of change makes no allowance for our need to pause occasionally, and to take stock (of our situation or our priorities). Just as the trees of the Rockies react to the stress of summer by shutting down and shedding their leaves, and the tires on our cars react to the abuse they receive at our hands (or should I say feet), we are reminded of how often we are called upon to make adjustments.

GoldenGate has been acquired by Oracle, with the earliest press releases hitting the wire services back in late July. For many of us working at GoldenGate, myself included, the news of the purchase was cause to celebrate. For the three years I had been working at GoldenGate, business activities had all focused on driving up the valuation of the company – and to make it attractive (and highly desirable) among vendors we considered viable suitors. And with the news of Oracle agreeing to purchase GoldenGate, we felt our efforts well vindicated. But then again, for those of us who worked in business development and who had responsibility for partner management, the immediate outlook looked pretty grim.

The nature of business development is to develop partnerships with high profile vendors that “accelerate” the sales growth across the company – a way to augment direct sales efforts by “bundling” features with the partner’s established product lines. But clearly, when a company is purchased, it’s by a much larger vendor as the price tag often takes it out of the reach of smaller vendors. The larger vendor is typically already well-served by partner managers and, just as importantly, probably has far more comprehensive connections into those partners than exists within a typical start-up.

This is exactly the situation with Oracle. In my case, the main partners I had been managing at GoldenGate were HP and IBM – and it was obvious from the outset that Oracle already had these two vendors well covered. All Larry Ellison, Oracle’s CEO ever needs to do is pick up the phone and call Mark Hurd or Sam Palmisano, and there would never be any misunderstanding or confusion by either Hurd or Palmisano about who was on the other end of the line!

So, once again, I am facing change and looking to add another entry into the log that is my career in IT. But how things have changed: the economic climate we all have to deal with has turned the old adage, about doors closing only to have others open, on its head as doors have simply been removed. Senior managers and corporate executives have to reinvent themselves and be highly visible agents of growth and of adding value – otherwise, there are few options. And I was quick to recognize that I had to turn traditional approaches (for my next “gig”) on their heads!

Welcome to Pyalla Technologies, LLC. And no, this has nothing to do with any Spanish seafood dish you may have seen on the menu of your favorite restaurant. Likewise, I can assure everyone, there’s no connection with ill-gotten gains so often associated with the recording industry! And I haven’t butchered anything from my wife’s Polish language either.

When I returned to in the late ‘70s, I started my own company, Uralla Holdings Pty Limited – and I really liked the sound of the name. It was just not something anyone associated with technology and gave me plenty of opportunity to start a discussion. Uralla was an aboriginal word and the name of a township in ’s New England district in the northern parts of the state of . And like Uralla, Pyalla is also an aboriginal word.

Only a few tribes around Port Jackson used the word Pyalla. And it simply means “to talk.” Today, we may be more familiar with Port Jackson by its other name, . By naming my new company Pyalla Technologies, I am essentially conveying the story of “the lad from who talks technology!” or something along those lines. My wife, Margo, and I had returned from dinner the other night and, in less than an hour, google.com had provided us with this surprising language discovery – and we quickly registered the domain http://www.pyalla-technologies.com/ and phoned our accountant.

By creating the new company, as I have already stated in a number of discussion threads on various online forums and user groups, I am declaring my intent to turn “pro” – although as best as I can tell, NCAA doesn’t have any rules covering situations quite like this. And no, I felt no need to rush out and hire an agent either. The IT profession hasn’t quite created an environment where this would be welcomed, although those in the recruitment business may argue differently. However, in today’s networked world where so much information is available with just a click of the mouse, I am quite inclined to believe it has become so much easier to communicate intentions and network on a scale unthinkable less than a decade before.

I plan to stay very close to the HP NonStop user community. And I plan to stay very engaged with the HP NonStop vendor community. My interests lie in all things related to middleware and infrastructure – whether communications protocols, or higher level services that we associate with SOA, or even the management and oversight of it all. It’s the data center that interests me most – setting it up, running it, managing it, and connecting it to those that depend on us: whether our customers or our business partners.

To this end, the new CEO of the Pyalla Technologies has accepted an invitation to join the board of Infrasoft Pty Limited, an Australian company focused on communications protocols as well as on Web services and SOA, and this will see me once again reunited with longtime associates from my days at Insession – Peter Shell and Neil Coleman. But I will also be working closely with several other ISVs helping out with white papers, essays and articles, as well as contributions to their social networking pursuits. Already, I am pleased to say, the work has started and I am absolutely thrilled by the reception I have received and with the enthusiasm with which my first inroads into the independent business world have been received.

For me, it’s the beginning of a new phase, a change of seasons, of adjustments better aligned with what I really like to do. Now there’s every chance. of course, that remaining independent may change as well – privatizing individuals is just as likely as privatizing companies in this economy. But for now, it’s a new world and I am having a lot of fun – fortunately, creativity and enthusiasm are still in great demand and I just love to talk (pyalla?) technologies!

While I may not have captured the title of “NonStop Talker,” a title I recently saw attributed to someone else, communicating and networking remain my first love in business and I will continue to write and to blog.

I will continue to be a presence in the HP NonStop user community – and yes, anyone can buy me a coffee at any time! In fact, I hope to start a regular “Coffee with Richard” series of virtual coffee shop meetings, where readers of this blog will have an opportunity to share their thoughts, discuss ideas, and either agree or disagree vigorously with what I will be talking about in the coming months!v

Congratulations Richard! I hope you enjoy the new challenges ahead. Your insights into Nonstop activities and technologies have been very much appreciated.

Great Post! Your global view on the past and future of NonStop technology is inspiring.