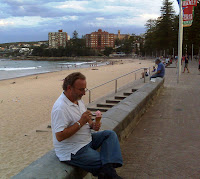 Suddenly, I was caught up in the fever that surrounds the annual running of the Melbourne Cup. A historic horse race held at the Flemington Racecourse, outside of Melbourne, Australia, it’s a long race of 3,200 meters (trimmed a few feet in recent times after the metric system was introduced). And it’s an ancient race, by Australian standards, having had its first running back in 1861. And it truly lives up to its billing as “the race that stops the nation.”

Visitors to the LinkedIn user group, Real Time View, will know of the discussion “Fast Lane” and of my social blog “Buckle-Up-Travel” where I frequently refer to events involving motor cars. And it was only a few weeks ago that “The Great Race” was held for Super V8s around the Mount Panorama circuit to the west of Sydney. On display on that occasion was an over-abundance of horsepower, but this week, it all came down to just a few horses.

While Melbourne enjoyed a public holiday, and the government of Australia was officially “adjourned” for the day so that dutiful members of parliament could all crowd around strategically-placed TV sets, it was a lot less formal in Sydney with business just turning a blind eye to all of their employees taking extended lunch breaks at their local watering holes. And the picture above is of me at sunny Manly Beach where it proved difficult to find a quiet venue for the evening on the day of the Cup.

But there had always been something that had bound the event at Bathurst with the event at Flemington. Both races covered a lot of ground –1000 kilometers for the cars (up from the old 500 miles), and 3.2 kilometers for the horses (down from 2 miles) and tactics and preparation played a very big role in deciding the eventual winner. Not for the fleet-of-foot or for anything lacking stamina, the events were designed to push both sets of contestants to the very limit.

When I first went to watch a running of the Bathurst 1000, back in the early ‘70s, the talk was all about who would lead for the first couple of laps, who would hang around and watch what developed, and who would preserve their car to be in contention for the last half hour! In other words, when it came to cars, running in The Great Race called for patience, and a measure of driver skill, so as to preserve the car for the final laps. But with time, and with the tremendous improvements that have come from technology improvements, watching The Great Race these days suggests it has become nothing more than an extended sprint. Certainly, teams send out two cars and often the lead car drives hard from the first flag fall, with the second car driving a little more conservatively should the team leader encounter any difficulties, but it looks to all watching that the cars are going flat-out for the duration.

Not so, for the horse race down in Flemington. Two miles is still a long way and horses bred for the shorter sprint events that dominate today’s racing calendar, are not up to the challenge. Horses that win the Melbourne Cup are clearly “stayers” and there’s nothing negative about using this word to describe the few horses up to the challenge of racing over this distance. Yes, they leave the gate as eagerly as any car leaving the starting grid, but it’s up to each horse’s jockey to manage the event. Not to get caught out wide for too long, and have to cover even greater distances; not to get caught too far back in the pack and unable to see the leaders; but just back a few and away from the fences. Running with a measured pace to ensure that the horse has enough to finish is the responsibility of the jockey but in the end, as with car races, every winner of the Melbourne Cup needs a small break and a little measure of luck!

It was only a week ago that I wrote about the user event in Canada – CTUG. And in another week’s time I will be off to attend the European event in Germany, an IT Symposium jointly held with GTUG. These events are giving me a new opportunity to look at the Independent Software Vendor (ISV) community that has grown up around the NonStop platform, and the pleasing aspect to this, from my vantage position, is that I recognize so many of them from the ITUG days. So many of the ISVs I knew from my time at Tandem Computers remain very active today, and the ecosystem in support of NonStop is as active as it has ever been.

The solutions providers are not always present at user events, as much as I would like to see more of them participating. For the bigger companies in the solution space, the economics are such that they can afford to hold their own user events and the likes of ACI, GE Healthcare, and those in the telco space have invested heavily in their own, or related vertical, events. The infrastructure and middleware providers, however, still rely on being seen alongside the primary vendor, working closely with NonStop product managers. These are the vendors who have proved, to the NonStop community, that they are “stayers” and have the stamina that the user community demands.

Many of the vendors offer solutions on platforms other than NonStop and a liberal sprinkling of products running on Linux / Unix / Windows (LUW) can be seen. For many products on offer this makes a lot of sense, as the need to use NonStop cycles for some features may be questionable. With the languages and tools underpinning these products, such flexibility is more of a byproduct, as the openness of NonStop today doesn’t preclude anything developed for LUW platforms running on NonStop any more than it precludes anything developed for NonStop from running on your favorite flavor of LUW. And for those vendors who have been part of the NonStop community for many years now, this has come as a huge relief as it not only gives them a bigger marketplace but the opportunity to recruit from among a younger generation of developers.

Managers of today’s NonStop ISVs are acutely aware of the messages coming from HP’s NonStop Enterprise Division (NED). Bringing costs down, pursuing standards, and integrating open “software stacks” with key NonStop middleware, is beginning to bear fruit as new vendors are attracted to the platform. In the presentations provided by HP to the CTUG community, two new solutions providers were identified. These were established companies that NED was working with, to port their offerings to the NonStop platform, and the expectation across the community that there would be new NonStop users as a result.

If the term “stayer” can be applied to the ISV community then it can certainly be applied to NED as well. The business environment has changed so much over the 35 years the NonStop platform has been available and, during that time, there has been times when the platform has faced serious challenges. At first, the competition came from other start-ups with alternate approaches, as the fault tolerant market blossomed. Then there was considerable pressure exerted by those commodity producers who turned to clustering – surely, the solution had to be a cluster of off-the-shelf boxes! More recently, the return of the IBM mainframe has made its presence felt with IBM determined to push the NonStop out of the data center.

But NonStop has truly proved to be a “stayer” and continues to thrive. The world has become even more tightly networked and there’s almost no business that is not connected in some fashion to the internet, and open 24 X 7 X forever. And the original attributes of NonStop are as important today as at any time in the past. Availability? Scalability? Data Integrity? Which of these key attributes has lessened in significance in the “always-on” world we live in today?

There was something historical about this past week as well. I managed to catch up with a good friend that I haven’t seen for many years, Len Rust. As the former head of IDC in Australasia, there wasn’t a trend or industry segment Len didn’t know about and from my early days with EDOS and Nixdorf I had depended on Len for insight into the industry. Len and I had met for coffee in the old Tandem Computers building in North Sydney. The coffee stand was new, but it was outside a restaurant that had been put to good use during my time at Tandem Computers.

Twenty years ago to the day, Steve Bailey and I had met for lunch in the restaurant to celebrate the Melbourne Cup. The horse I picked, in the restaurant’s “sweep” where tickets for horses had been drawn at random, was involved in a photo-finish – but clearly, my horse had! So a good bottle of Champaign was opened just a few minutes before I heard that my horse had finished second! But it did little to curb our enthusiasm. In the weeks that followed, Steve and I left Australia to take up positions with Tandem Computers and we have both remained close to the NonStop ISV community.

Probably too early to call either Steve or I “stayers”, or to think we are winners, but I get the sense that my own involvement with NonStop will continue for many years to come. New vendors! New users! After all, this is why many of us in the NonStop community have stayed in the race and why we have paced ourselves the way we have for so many years. Like good jockeys, we haven't strayed wide, or lost ourselves within the pack!


And if the experiences with the NonStop vendor community over the past few weeks counts for anything at all, this has to be good news for us all!

Just wonder if there is a significance in the fact that the name of the horse that won the race was Shocking.
His name was Shocking, it wasn't a shocking name. Now the challenge is to connect this "dot" to the "stayers" - ready?