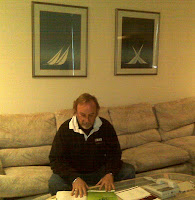 It was late summer 1977 when I found myself in Boston working with a banking customer, installing the data base management system, Datacom/DB, and migrating their applications from IBM’s DL/1. I became involved with the installation as I was familiar with the programming language, PL/1. I cannot recall the specifics of what transpired, but I can recall that I made sure the work continued past the weekend and into the following week! For sailing “history” fans, they may recall that in the early weeks of September, 1977 the America’s Cup was under way and I spent the weekend at Newport, Rhode Island.

Australia was the challenger and its latest 12 meter yacht, Australia, faced a formable foe in Robert Edward Turner, better known as Ted Turner, as well as “The Mouth from the South” and even “Captain Outrageous,” aboard the heavily modified Courageous. The picture at the top of the page was taken in my Boulder office where behind me on the wall hung silk-screen prints promoting the America’s Cup of ’83 (the US defender lost) and of ’87 (the US challenger won it back). These prints were offered in support of the Dennis Conner, the skipper who indeed lost, and then won back, the Claret Jug or as it’s even more widely known as, the Auld Mug, to/from Australia, my home country by birth.

This past week, the America’s Cup race has been making the headlines as once again, it was surrounded in controversy. From 1956 till 1987 the rules called for yachts built to the “twelve meter rule” and from 1992 to 2007 a new yacht formula was introduced, the “international America’s Cup class” (ICAA). For the event just completed, a best of three series, instead of Ted Turner or Dennis Conner taking center stage, it was BMW Oracle Racing’s Larry Ellison aboard the technologically advanced, rigid-wing, trimaran USA-17. The team they beat, the Swiss defender Alinghi, showed up for the event off Spain in a much less technical catamaran that ultimately proved not up to the occasion.

Both teams, and on very short notice, had to develop yachts from scratch working with not much more that a blank sheet of paper. Gone was the ICAA formula, a legacy from the times when this was just a competition! But in the end, it proved difficult to match the superior speed that a triple-hulled vessel produces – with or without the rigid-wing aerofoil. Sitting on a jetty, watching the competing yachts head to sea, as I did in 1977, seems so long ago and a far cry from what is transpiring today.

The characters at this level of yachting still exist and Ellison appears to be a worthy successor to the likes of Captain Outrageous and Dennis the Menace! And migrating systems from one infrastructure platform to another, as I was so keenly driving in '77, continues to dominate much of the exchanges I have had with customers, vendors, and HP these days. There may be a more serious aspect to it than we associate with competitive sailing, but there’s still a strong cast of characters willing to try something new.

In an article I posted to the blog on February 1st, ’10 “From beneath the swirling mists …” I wrote of a new partner to the world of NonStop busily porting a .Net application to NonStop to address the needs of the retail industry. Encouraged, I have to admit, by the uncertainty that surrounded ACI Worldwide’s December ’07 announcements to switch platforms, preferring the IBM System z to the HP NonStop Server, the vendor saw plenty of opportunities ahead. It appears that now, however, they haven’t acted in isolation when it comes to jumping on the uncertainty over ACI Worldwide’s platform strategy, as in India, Opus Software has elected to pursue the porting of their Electra Switch software to the NonStop as well.

"We developed a lot of experience with existing product offerings but in time, we found that traditional payment systems have issues such as time and costs to modify, proprietary tools and difficulties in adding new functionality. We architected electra to eliminate these issues and provided customers with flexible and change management friendly solution with an extensive, intuitive and rules driven approach to processing and interface definition,"said Ramesh Mengawade CEO Opus Software and Electracard Services.

Opus Software has for many years been providing services in support of payment engines, including BASE24, but viewed the prospect for further business in Asia, the east coast of Africa and potentially even new business further afield in Europe and America, could be better addressed with a product of their own. Opus elected to create the subsidiary, Electra Card Services (ECS), to focus solely on providing product into this marketplace and has had early success in its home country of India.

In a recent email exchange with Sandeep Kapoor, Director , NonStop Business APJ, he informed me of how "we are very excited about the prospect of Opus providing additional solutions in the APJ marketplace and fully expect them to prove to be just as successful on the global stage. They are demonstrating the new price-performance (TCO) value that comes with the NonStop Blades offerings.”

Following early work with NCR, Diebold, and others, the Electra Switch product was first introduced for Unix users, but with the change in platform strategy by ACI Worldwide and the availability of much lower cost blade configurations, it became an easy decision for ECS to port to NonStop. The pursuit by HP of a "converged infrastructure" strategy that acknowledged partners needs for flexibility and that today, included the NonStop platform, they could see no barrier that prevented them from porting to NonStop. With Electra Switch on NonStop it allowed ECS to grow from simply pursuing “green-field” opportunities, in emerging markets, to more aggressively market to established tier 1 financial prospects.

"From our product perspective we started with a clean sheet, with respect to the framework underpinning the Electra solution suite, and entered the marketplace supporting Unix platforms. However, after HP offered support for NonStop on Blade Systems, at a time when the legacy vendor was refocusing its attention onto other platforms, the price point for supporting NonStop became attractive. Today, we have a single code base across Unix and NonStop with only small changes made to the framework," Ramesh Mengawade went on to explain in a recent call I had with him.

Porting Electra Switch to NonStop gave them a product family where they could start out small, where transaction volumes were light, and grow with the customer and provide them with a more comprehensive NonStop product offering as the circumstances dictated. “Being able to offer prospects the option of running next generation payments infrastructure on NonStop Blades with a new reduced TCO, delivers significant competitive advantage especially in emerging markets of South East Asia and India.," Kapoor later told me.

The objective for ECS was to develop a framework that supported a number of application solutions in a way where the code base for these applications would be the same no matter the platform. They started with a clean sheet of paper and were able to bypass many of the legacy components still carried by many of the competitors. They wanted to build a modern product in a mix of C and Java languages. What they saw coming to market for NonStop was just the kind of technology they thought may be able to help and, working with HP’s NonStop Advanced technology Center (ATC) in Cupertino, they first ported the product to Tuxedo, and then, a few months later, to Pathway. Their use of the Oracle data base was limited to just the ANSI interfaces so that they were able to transparently access NonStop SQL/ MX.

“We have been working with Opus for the past couple of years; we originally did a porting analysis in 2006, and followed this up with several detailed design reviews,” Chris Russell of the ATC, informed me. Russell then went on to add “following our recommendations, Opus converted their C/Tux/Oracle implementation first to NonStop SQL/MX while using NonStop Tuxedo and this was followed by a second stage of conversion from NS Tuxedo to Pathway (TS/MP) last year. Neither porting step was over-complex. Along the way, we have been reviewing their Measure data and providing tuning advice, which they followed; I think they have been very good to work with - they have a lot of NonStop skills."

For me the big story here is that Opus has a product equally at home on Unix, NonStop, and from what I can tell, potentially Windows as well. With Electra, they have a very modern architecture built using open tools, such as SQL / C++ and, with XML and Webservices interfaces, it empowers their users in a highly visible and powerful manner. NonStop customers clamor for more solutions, more ways to exploit the NonStop investments they have made, and if their favorite Unix or Window application can be easily supported on NonStop, then the opportunities for NonStop become limitless.

There’s still some way to go, of course. I am fully anticipating further run-time environments to be supported on NonStop and will be sure to attend June’s HPTF event for more news on that front. But until then, I remain as optimistic as I have ever been that the future of NonStop looks bright as it continues to attract new partners like Opus who can realize their goals of a single code base running on the customer’s platform of choice. And don’t we all want to see that eventuality much better championed by everyone with an interest in NonStop!
By Richard Buckle - February 17, 2010