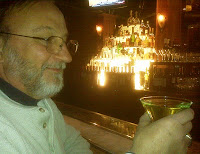 The past six months have flown by in a blur. There was Christmas and the New Year. There were trips to user events in Canada and Germany. All the while I was attending to the development of my own company, Pyalla Technologies, and on the lookout for opportunities to write articles and to provide consultations and commentary on marketing and business development needs. Yes, I made time to continue posting to the Real Time View blog and to the various groups on LinkedIn. For the past two weeks I have been in Boulder and the picture above is of me at the local Boulder Chop House enjoying an Apple-tini, celebrating 6 months in business on my own!

Arriving back in Simi Valley I have been able to catch up on a lot of reading; technology and financial newsletters, as well as car and motorcycle magazines that seem to accumulate in the mail box while I am away. Somehow I have managed to organize my travels so that these publications only ever arrive when I am absent. Flipping through the pages I lost count of the number of times I saw references to “halo products”, as writers talked of one product or another as being a manufacturers’ halo product. It was only recently that I first heard this term, but today it seems difficult to read any article without a reference to it, or to the equally flamboyant expression “the halo effect.”

There has been a lot of attention focused on Apple these days as it launches the iPad. Sure enough, tucked away in one of the early reports was a reference to the iPod and to how the iPod has been Apple’s halo product having had a remarkably positive effect on the perceptions about Apple’s other products. “In brand marketing,” according to one description I ran across on the web, “a halo effect is one where the perceived positive feature of a particular item extend to a broader brand.”

In the automotive industry, where the term is widely used and “where a manufacturer may produce an exceptional ‘halo vehicle’ in order to promote sales of an entire marque,” there are several readily-recognized halo products. For many years now Ford has exploited the “technology showcase” provided by the short production run of the updated and thoroughly modern Ford GT. The halo effect it generated across the complete Ford product line couldn’t be missed – the general assumption of all who stepped into a Ford dealership was that, whatever the car on display, it too would embody the spirit of the famous Le Mans car of the late 1960s. When FIAT completed its purchase of Chrysler, the first vehicle assembly line to restart following months of lying idle was the Dodge Viper, Chrysler’s halo product.

Returning to the Web, and to the Wikipedia, I read of how “the halo effect refers to a cognitive bias,” and this didn’t come as a surprise, nor did the rest of the reference contain anything I hadn’t already begun to recognize when it added “whereby the perception of a particular trait is influenced by the perception of the former traits in a sequence of interpretations.” Anyone watching television in America will recognize the new commercials for Nissan, famous for producing affordable, sporting cars where silhouetted behind the familiar econo-boxes is the legendary Nissan GT-R, one of the few recent Japanese vehicles to have achieved “supercar” status and indeed, perhaps the best example of a halo product of any car manufacturer!

Halo products are present across IT and it shouldn’t come as a surprise to anyone with any history in IT. For as long as I can recall, for instance, the IBM mainframe symbolized all that was IBM. Who will argue that Oracle’s fortune today rests on anything other than on its Oracle data base! Likewise, few people would know where to find Carey, North Carolina, if it wasn’t for the success of the SAS analytic products.

Earlier this week, I started a discussion on the LinkedIn group, Real Time View, under the title of “NonStop; HP's ‘halo product’ ...” and the comments posted have been rather enlightening. Apart from the quick recognition that HP has a product branded as Halo, a reference to the tele-presence and video conferencing solutions HP launched in early March, 2008, the first comment posted made the observation of how “it would be good for HP (and all supporters of HP) to sing loud and long the successes of the NonStop architecture.” I liked this response as it made the connection between halo products and success. As I looked back at the list of products recognized as being a company’s, or marque’s, halo products it is clear that the recognition owes a lot to these products being successful.

Success, however, comes in many flavors – success can be achieved on the playing field or race track but it can also be a measure of the sales a product achieves in its marketplace. Even when it may be a niche, a successful product simply outperforms the competition! The writer of the above comment went on to add “NonStop has been at the top of the availability index for a long time now, and the IBM mainframe is only just catching up. The longevity of the NonStop's expertise in this area must also carry some weight.” HP’s product lines embrace many different architectures, and support numerous technologies, but when it comes to providing the most available offering, right out of the box, NonStop remains unmatched. Certainly, in the context of unrivaled levels of availability, the success NonStop has enjoyed through the decades, and the challenges it has seen off the playing field, elevates it to the position of being a halo product.

On another LinkedIn group, Pyalla Technologies, I have maintained a running commentary of my times spent driving cars on race tracks. I have titled the discussion “Time in the Pitts!” and have drawn comparisons between my observations on track days with what I see taking place in business. Recently I wrote that “I am in discussion with several solutions vendors who are quite excited to be porting their product to NonStop and I have to look back at those vendors who just stopped supporting the platform.” I then go on to add “but now, there's not a more modern platform than NonStop and, as the premier, halo product when it comes to availability, I am expecting to see even more choice in solutions offerings for ‘the box we have’!"

However, some of the comments posted have expressed caution over positioning NonStop as a halo product. “Yes, NonStop has an impressive list of Global Fortune 100+ customers, but it represents only a fraction of one percent of HP gross revenue; that forces it to be very careful when it comes to making waves (like wanting more recognition and support),” was the message of a comment added shortly after I made the posting. However the same author then went on to add “I cannot think of any other reason why the advantages and characteristics of NonStop don’t get ‘shouted from the roof tops’.”

In parts of the former British Empire including Australia, New Zealand, Canada, as well as the UK and Ireland, there is a well-known term – the “tall poppy syndrome.” It describes a social phenomenon, as one web site explained, “in which people of genuine merit are … cut down, or criticized because their talents or achievements elevate them above or distinguish them from their peers.” On reflection, almost the complete opposite to the halo effect where the merits of a product reflect well on the entire product family. Yet, in the years that have followed HP’s acquisition of Compaq and with that, the acquisition of Tandem, along with being perceived as a halo product, could NonStop have become a tall poppy?

Reviewing many of the comments made by HP leaders, like Martin Fink and Winston Prather, I find little evidence that tall poppy syndrome exists within HP. Martin’s observations about the future potential from polymorphic computing speaks volumes about a successful future for NonStop and in his messages of a converged infrastructure Winston is a strong proponent of NonStop. Readers who have seen the latest White Paper from The Standish Group, Megaplex, are left in no doubt of the central role NonStop will play in any future shared infrastructure product lines.

Arguments will continue about the importance of NonStop to the rest of HP’s brands. With all the product rationalization that has occurred since the acquisition, I for one am very pleased to see the sizable investments that continues to be made in the NonStop platform. But perhaps the biggest attribute of halo products is their exclusivity – halo products usually aren’t high-volume items. They are the models that are highly specialized and have been developed to dominate a niche.

Against this background, I have no reservations – NonStop continues to be an HP halo product, and of that I am more than proud to be associated with the NonStop community. The last author referenced above went on to add something I particular relate to when he said “to me it still makes sense to position a NonStop system in the center and surround it with all the other HP hardware to get the best leverage across the entire datacenter.” With a sentiment as strong as that, I think I will pour myself another Apple-tini and toast again, the success of NonStop! After all, on the playing field that is IT, after a hard fought 35 years, it continues to have no peers!
By Richard Buckle - April 08, 2010