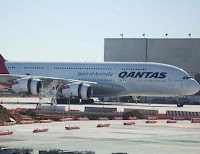 This week I flew to Cupertino on business, leaving LAX airport early in the morning. Pulling back from the gate and taxing to the active runway, we passed the forlorn sight of the QANTAS Airbus A380 super-jumbo standing idle alongside their hangers, pictured above (courtesy of AP, as published in the Australian newspaper).

Recent mishaps with the A380’s Rolls Royce engines have forced QANTAS to ground their fleet of super-jumbos. On a flight from Singapore to Sydney an engine failed catastrophically and the plane was very fortunate to make it safely back to Singapore.

QANTAS has for years enjoyed the reputation of never having lost a passenger to a plane crash and since the modern era of jet airlines remains alone in this category. Providing a reliable service is core to QANTAS’ business and any weakening of this message brings serious repercussions.

The Airbus A380 super-jumbo is an impressive and extremely innovative aircraft that has captured the flying public’s imagination. But gradually, as more news of the incident aboard the QANTAS flight surfaces, reliability rather than innovation, has grabbed the headlines.

According to an Associated Press (AP) article of November 18th, 2010 “Cascading failures followed airline engine blowout” Richard Woodward, a vice president of the Australian and International Pilots Association told of how “the pilots were inundated with 54 computer messages alerting them of system failures or impending failures (and) with only about eight to 10 messages able to fit on a computer screen, pilots watched as screens filled only to be replaced by new screenfuls of warnings”.

AP then added “airplanes are supposed to be designed with redundancy so that if one part or system fails, there is still another to perform the same function.”

But failure there was, as AP continued, “an electrical bus — a connection between electrical devices — on the left wing failed. The plane was designed so that a second bus on the same wing or the two buses on the opposite wing would pick up the load. That didn't happen.”

How close this came to ending QANTAS’s stellar reputation for reliability we will probably never know, but it’s looking increasingly like the crew and passengers dodged a serious bullet! It took a highly skilled team of pilots to deal with the emergency and preserve the aircraft.

Innovation has been a constant theme of postings to this blog. For the NonStop community, even after 35 years, the original architecture of NonStop is as relevant as it ever has been. The ability to continue to function after single point of failure has ensured it a place at the center of transaction processing and e-commerce applications.

The world is changing fast. Data centers are consolidating. Services are coming from multiple external suppliers. Outsourcing, off-shoring, and the increasing dependence on the internet are changing the future of the data centers.

Commoditization of hardware platforms is driving the prices down and open technologies are accelerating the adoption of new business models. Cloud computing is beginning to appear with yet to be seen ramifications for the data center.

Our everyday life is changing fast as well, and at times it seems as if we stepped onto a science fiction movie set. Checking in at an airline gate with my mobile phone, without any paperwork; loading a movie directly to my TV screen, instantly; re-mapping the tune of my car’s engine, and even its gearbox without a mechanic; remarkable! A wealth of computing power being applied in ways very few of us had considered only a few years ago.

But it’s all of little value if it isn’t reliable, and reputations developed over decades can be quickly lost from disruptions to the flow of business critical information. Perceptions can quickly change and the fall out can stay with us for a long time.

In a recent email exchange with Thomas Burg of comForte, he drew my attention to the latest data sheet on the HP NonStop iTP WebServer. This product has been available for many years, but I have to admit, it’s been some time since I read a data sheet on its capabilities.

“Designed for transaction processing and electronic commerce … implemented as a Pathway server class … (and) with Resource Locator Service (RLS), allows the iTP WebServer software to act as a front end to commodity servers based on the UNIX or Windows NT operating systems … (providing) reliability and availability to commodity Web servers by monitoring their status and selecting a server that is available and capable of processing the request.”

Front ending services and interfacing directly to the internet using the HP NonStop server raises some concerns, of course. Given the potential to improve the reliability, there’s still the issue of connectivity –NonStop as the front end for ATM and POS networks met the stringent reliability demands placed on it, but positioning NonStop as a web server and as the front end to everything within the enterprise is an entirely different proposition.

But not one that’s deterred some companies, suggests NonStop Product Manager, Sanjib Guhathakurta who emailed me a just published case study on the manufacturer, Rasselstein, a subsidiary of the steel-producing giant, ThyssenKrupp AG.

“The Integrity NonStop system integrates seamlessly with the rest of Rasselstein’s computing environment, including mainframe, UNIX system-based SAP business applications, and many Linux and Windows servers,” the company explains in the data sheet.

“Features of the HP Integrity NonStop platform are very important for us,” states Johann Pausch, Head of Application Development Manufacturing Execution and Logistics at Rasselstein, and he puts the NonStop system’s delivering the highest availability at the top of his list. “Its excellent connectivity to other IT systems and intelligent production devices, it is well suited to be the central platform for our highly automated production environment.”

The promotion by HP NonStop Enterprise Division (NED) of the use of NonStop as a web server front ending the whole internet (as they are now promoting), shouldn’t be a surprise to any of us familiar with NonStop although, I am willing to bet, such a configuration wouldn’t immediately come to mind for most CIOs.

It should also not come as a surprise to the NonStop community as this has been the theme of numerous presentations and many papers for all of this decade. The HP NonStop platform is the ideal candidate for front ending internet access, just as it has supported transactional processing and electronic commerce solutions since it first appeared in the marketplace.

In an article published in the July / August 2002 issue of The Connection, “Web Technologies on the NonStop Platform: Why Bother? Which ones?” written by Thomas Burg, he observed how “people underestimate the effort of (securely) running a Web server on other platforms and that the NonStop platform deserves some consideration as well.”

Just as importantly, comForte’s Burg notes “HP’s message about scalability and availability, and low TCO of NonStop servers, are convincing arguments in favor of a web server on the NonStop system.”

2002? Yes, 2002! Almost ten years ago. The growing interest in cloud computing and the desire to push down costs will really stress many companies’ abilities to maintain the reliability their customers will demand. For many of these companies this could prove disastrous to their business and prove to be a windfall for the competitors.

QANTAS found that they were fortunate, indeed very lucky, with the recent incident involving their superjumbo. According to AP, “it was just luck that there happened to be five experienced pilots — including three captains — aboard the plane that day. The flight's captain, Richard de Crespigny, was being given his annual check ride — a test of his piloting skills — by another captain. That captain was himself being evaluated by a third captain. There were also first and second officers, part of the normal three-pilot team. Even with five pilots working flat-out, it took 50 minutes to prioritize and work through each of the messages.”

Thomas Burg’s article written back in 2002 remains relevant, and we discussed how introducing a web server on anything less reliable than NonStop in support of the solutions we are seeing come to market can be done and, indeed, is still being done by many companies. Much of it pursued with little advanced planning and just as little insight into how to deal with growth while maintaining reliability. I have to wonder how many of them will be lucky enough to dodge potential bullets the way QANTAS managed to do.

What about their reputations? And what value do companies place on reliability? As globally economies begin to come back after several years of recession and competition begins to heat up, I have to believe HP will come to fully appreciate what they have in NonStop and we will see even greater deployment of NonStop servers playing a more prominent role in every data center!
By Richard Buckle - November 21, 2010

Rolls Royce engine failures on many different aircraft is the root problem.

Only now do we see the extent!

Reminds me of BP ignoring their many problems over just as many years.

Agree - and I covered that in my opening. But I didn't want to dwell on that issue as I'm sure RR will sort it out ...

But bottom line - not matter how it arrived at the place it's at today or the mix of suppliers involved, bottom line? QANTAS has taken a hit with it's reputation and that's often difficult to overcome ...