In this follow-up to what was last posted, where I expressed some surprise that after 35+ years, there still wasn’t a platform that challenged NonStop, I now chastise those CIOs who believe they can spend their way to success! 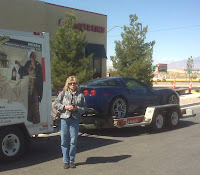 The other weekend while enjoying the opportunity to take the Corvette to Spring Mountain Motorsports Ranch, outside of Pahrump, west of Las Vegas, and lapping the large 3.1 mile circuit with other enthusiasts, I had the misfortune of blowing a major seal in the car’s supercharger. The effect was terminal and the ‘Vette will now spend several weeks in the shop either undergoing costly repairs or, hopefully, being fixed under warranty.

While I sat by the car, a little shaken by the experience and not immediately coming to terms with the impact it would have on my plans for the coming week, one of participants tried to comfort me with the sage advice it’s only money! The picture at the top of the page is of Margo alongside the ‘Vette as we completed the transfer to the U Haul trailer we rented in Las Vegas, very unhappy that yet another weekend of driving for her had been lost due to my early morning enthusiasm.

Yes, it was only money but it reminded me of how often I have heard the phrase check-book racing and of how, no matter the event or track, there are those who arrive with toy-haulers and some amazing cars only to circulate the track behind less-powerful, underfunded, drivers who simply can work wonders on vehicles that, for many of them, are their daily drives. Local knowledge can compensate for much!

Rarely does the participant with the biggest check book prove successful; the odds favoring them can be tilted only so far and eventually, the skills required truly play a big part. Knowledge of the requirements of the car as well as the circuit, together with the experience gained from having driven many hundreds of laps, often prove hard to replicate and these big-budget participants end the day frustrated with their inability to achieve better results.

During the past two weeks there’s been a definite lift in the number of readers participating in discussions in LinkedIn groups - Real Time View, HP NonStop Tandem Professionals, NonStop SQL Professionals, Tandem User Group, as well as a number of vendor-specific groups such as comForte, Attunity, etc. The subject of my last post to this blog, “I’ll give you ‘what’s changed!’” created lively debate about the future of NonStop, what more can HP be doing to promote the platform, what more can HP do to develop a larger community of solutions providers, as well as a continuation of the discussion over the merits of TCO and ROI numbers routinely thrown around and that favor the HP NonStop server.

When I promoted the previous blog posting to these groups, I did so with the candid observation of “what really surprises me is that, even after 35+ years of market presence and there being no viable alternative solution that you can drop into a data center with the levels of availability and scalability NonStop provides, NonStop continues to be overlooked and even marginalized as often as it is!” I suspect that the many discussions that followed probably took exception to the provocative nature of the observation. However, the observation proved tough to discount – there is still no real alternative to NonStop for those applications that carry the responsibility of keeping the company in business.

Just as those turning up at the circuit with check books in hand so, too, have many CIOs found that simply approaching the support of applications critical to running the business with check books in hand, has rarely gone the way that they expected. Over the decades we have witnessed those large projects where enormous budgets were allocated to a new strategy and where a major vendor was brought in to rectify the perceived ailments within IT.

Whether it was banking core systems in the 1990s, or government department overhauls in the 1980s, after the initial headlines grabbed our attention, very few of these initiatives ever delivered on what was promised. Check book IT simply wasn’t the quick-fix many in management had expected.

Today, everything can be supported on commodity platforms and with open software. Or so we’re told. Smart individuals can quickly develop impressive prototypes and even more-impressive pilot deployments. However, in time, there’s either a scaling issue or unexpected consequences from changes in business focus and market conditions. What looked good on a whiteboard often fails to deliver the expected results, no matter the investments!

A single Linux server may have cost very little, but 250 of them (with their software licenses) trigger significant heartburn and often stunned silence when the checks are finally cashed! Yet check book IT continues to persist. Let’s give every business unit their own big budget! Let’s consolidate all the servers and give the CIO a bigger budget! Let’s pursue Cloud Computing and set aside an even bigger budget! And so it goes …

In a recent article in The Connection magazine (May – June, 2011) I quoted Dr. Richard Hackathorn, an authority on EDW and BI, who suggested that running a typical data center these days had moved dramatically from being like steering a large ocean liner to where it was more like landing an airplane at a very busy airfield. Opportunities open up quickly for pilots and if missed, they are forced into holding patterns awaiting a new opportunity!

No matter whether they are flying small aircraft or cargo planes, the experienced pilots know how to capitalize on the short windows they are given to execute a successful landing. Likewise, experienced CIOs have come to recognize that to retain flexibility, a key goal with today’s modernization projects, failure to leverage what they have can often result in not meeting the demands! There’s everything to gain from retaining NonStop!

The NonStop platform remains relevant as it provides CIOs with the opportunity to “land at busy airports.” It continues to do well integrating with other platforms and it impresses with the way it supports modern languages and programming interfaces. Yes, Java had it tough when it came to running on the older K-Series and S-Series servers, but today those who run Java on the latest Integrity servers experience none of the ill-effects of those earlier implementations. Indeed, the experience gained by those early users of NonStop is what is contributing to them competing as effectively as they are in the marketplace.

There is a lot of data that demonstrates the financial benefits from running NonStop; TCO and ROI figures remain as important as they ever were in the past. Just as experience and familiarity and the appreciation for what works (as distinct to what distracts) shouldn’t be discounted, neither should we be too quick to dismiss these numbers. It’s become all too easy to be swayed by the opinions of the broader IT industry and by the clever charts of analysts only too anxious to reduce IT to a single architecture and deployment model.

I ended the previous posting with the comment on how the strength of NonStop lies in the protection it provides – from unexpected growth, from unpredictable outages, from unwanted hackers. Perhaps I should have added that it also lies in the predictability of the outcome when it comes to reliance on NonStop. Yes, steps can always be taken to improve the ease of use and supportability of a platform, but these can be easily managed.

My message to the CIO? Put away the check book and just let your local knowledge kick-in and prove how beneficial you can be to the running of the business! Take a good hard look at the headlines of late telling of the Clouds that have failed and the scope of services disrupted. Don’t be too quick to take NonStop out of your Cloud Computing considerations. And don’t smile too broadly once discussions begin on deploying two or more Clouds as that’s what Tandem was about, remember, all those years ago!
By Richard Buckle - May 22, 2011