For me travel is always educational and a time to catch up on the news - magazines, newspapers and the internet. And so, yes another stock exchange goes down - this time, closer to home. The Australian Stock Exchange. It sure does beg the question when it comes to staying in business - what does it truly cost when you're unable to support your clients? 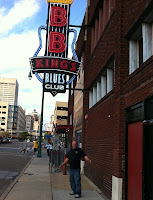 Road trips represent time to reflect and on my recent drive to Atlanta this proved to be the case. I am passionate about driving and this year has seen me driving to Northern and Southern California with stops in Las Vegas; to Phoenix, Arizona through the back country to the north east of that city that also took in Albuquerque; to Chicago as well as to Minneapolis (two separate trips but via Omaha both times) in addition to this recent escapade. Throw in separate weekend trips to the wine country of western Colorado as well as excursions to Aspen and Telluride to catch the fall colors that make Colorado the colorful state that it is and yes, I have had more than enough time to reflect! And the picture above was taken of me, standing under the sign advertising BB King's cafe and blues club on Beale Street, Memphis!

Nearly all of the cars we have safely parked in the garages today (yes, winter offers little respite for top-down cruising through the canyons) have been involved in my travels but as I wrote the article just posted to Buckle-Up, my social site, “Taming the Dragon?” I reflected on how I would have much preferred to have driven our Corvette to Atlanta but with it undergoing service, it wasn’t an option. I remarked on how “even with two Corvettes and as passionate as I am about Tandem and NonStop in my business life, the ‘back-up’ Corvette is just configured differently and doesn't lend itself to long trips where there's shared driver responsibilities. Yes it's a manual whereas the big 'Vette is an auto!”

It was as I completed my feature article for the November – December 2011 issue of The Connection that I followed a similar thought as I worked on the story line. The theme for this issue is to be “Business Continuity/Disaster Recovery/Availability” and I elected to open up, more than I had done previously, on my thoughts about the likelihood of increased competition following Oracle’s acquisition of GoldenGate. It’s been just over two years since that deal was consummated and it has opened the door for other vendors – middleware and solutions – to rethink their options. However, as I began this feature, I opened with something similar to what I wrote in my social blog, Buckle-Up!

“Shortly after Margo and I wed, we built a house outside of Boulder, Colorado. At the time we chose to replicate every major appliance – combining two previous homes made this a rather straightforward decision,” I began. I then added “However, when we added a basement bar, we purchased an ice-maker that could generate a lot of ice very rapidly, arguably a mission critical application where failure would be intolerable during Colorado summers, particularly after 5 o’clock! Can’t recall exactly what our logic was at the time, but with our heritage in NonStop and the critical role this appliance would play, today that logic looks pretty flawed.” Yes, this critical appliance has failed totally and “having an ice-maker that no longer provides ice is a nuisance and results in many trips back to the refrigerator in the kitchen”!

As I wrapped up the feature, along similar lines to what I had said about having two Corvettes, I noted that “it’s not a real solution as I should have duplicated the ice-maker with a second ice maker of the same capacity as the first one, even if I do not need it all that often; impromptu parties and other social occasions may place unexpected strain on something of lesser capacity should it fail again! However, this is a far cry from the fallout that would result should an organization fail to recover from outages in a timely manner.”

It is with both of these stories in mind, that news broke yesterday of yet another stock exchange unable to process trades. “Australian bourse red-faced after 4-hour trading shutdown,” was the headline on the web site of CNBC, perhaps the most-read business site in the world today. “Australia’s stock market suffered an embarrassing shutdown on Thursday, as technical failures halted trading for four hours … the technical glitch and the duration of the shutdown is a blow for bourse operator ASX Group especially as this comes ahead of rival bourse operator Chi-X’s launch on Monday, ending a two-decade monopoly.”

According to the Sydney Morning Herald (SMH), in a larger expose on what happened, published under the headline “Timing is everything, as ASX painfully discovers”, on Friday, October 28th, 2011 they reported that “yesterday should have been a happy one for most people with money in the sharemarket … but when the market maker – the exchange that facilitates the trading of shares – stops operating, the blame is placed squarely on the shoulders of the ASX. Yesterday’s four-hour closure of trading on the AX was nothing short of a shemozzle.”

My own experience with the ASX dates back to my earliest days with Tandem Computers when I worked in the Sydney offices, and we lost the deal with ASX to Digital Computers a fairly rare occurrence back then. When it came time to upgrade, however, ASX elected to switch to solutions and platforms supported by NASDAQ OMX. So now we have the story on the CNBC web site, “ASX said the outage was due to a connectivity issue with the exchange’s trading system, which in turn hampered participants’ connection to the ASX trading engine (and that) ASX has worked with NASDAQ OMX to resolve the glitch.” Ouch! Sure would have been nice to have something more reliable. And a back-up, that worked!

It was observed by Winston Prather, in his editorial in the September – October, 2011, issue of The Connection that as “we take a more in-depth look at how this strategy has helped us deliver significant performance improvements … a few words about where this does and does not, apply.” While not specifically singled-out as a market segment, it’s clear that the current challenges facing stock exchanges today was what was being addressed as Prather then added “there are some areas of the market where performance is the highest priority, and users are willing to trade data integrity and resilience to achieve it.”

Perhaps even more relevant with what we are seeing in the fallout from the ASX shemozzle, “In some cases, NonStop may not be the right answer – while we continue to deliver significant performance improvements, we will never sacrifice our core fundamentals and value to achieve them. NonStop delivers competitive performance under the philosophy that the integrity of the message has value.” And yet, in what is becoming a highly competitive marketplace, there are Stock Exchanges who are using NonStop and getting performance that is quite remarkable!

In her post of August 18th, 2011 to the web publication realtime.ir.com, “The Instant On Enterprise is Here. All Modern. All Standard. All NonStop” blogger Sue Bradshaw, much more comfortable with the world of telecoms than NonStop, was impressed all the same as she listened to a keynote presentation at the recent OzTUG event in Sydney. “We received a fascinating insight into the Hong Kong Stock Exchange upgrade that increased throughput tenfold and reduced latency by 15 times, she began. Bradshaw then remarked of how “this is where I first heard the term ‘single digit millisecond’ and as someone who has focused for many years on monitoring voice quality, I found that achievement fascinating. When you consider that the transaction latency achieved was less than 10 times the minimum required to achieve the highest voice quality, I was very impressed.”

The metrics are indeed different when it comes to comparing trading systems in place with NASDAQ in America versus what’s in place in Hong Kong and when it comes to the very biggest of exchanges, what Prather describes is pertinent. However, many other markets may want to consider other criteria than simply speed alone. I have heard it described somewhere as thinking in terms of whether you heed a dragster or an F1 car – each will outperform the other on tracks where they were designed to compete. And perhaps the big hit ASX took at the most inopportune time (where business will likely be lost to a competitor about to open their doors) will be a wake-up call for others.

Availability will always be an important requirement. Being able to rely on a platform with the resilience of NonStop, particularly when configured with a second-site backup that has become so important today, will continue to appeal to many responsible CIOs. When the alternative is to see headlines appear globally in a matter of minutes and where financial commentators went so far as to suggest, as reported by SMH, “the ASX breakdown cemented the need for more than one operator in the market. The new exchange (Chi-X) will now become the back-up and a potentially meaningful competitor.”

Not exactly the outcome ASX had in mind, I suspect, but then it takes very little these days to tip the tables in favor of others following just a couple of hours of downtime. The price ASX will now be paying will leave many involved scratching their heads and rethinking whether speed remains the sole requirement. This may have little in common with my failed icemaker or having differently configured Corvettes but in the end, those involved may come away just as frustrated and when there’s easy solutions on hand, probably the same level of regret at having not considered all possible outcomes.
By Richard Buckle - October 31, 2011

Thank-you again for your august perpsectives to timely issues where NonStop is part of the correct equation. Too bad today's IT professionals are not more versed in what ACID means.

I would suggest HP might want to spend some effort re-educating (advertising) the implications of "good-enough" architecture, solutions and systems in light of business requirements not what's least expensive. BTW, next time you're driving around the SE stop in!