Today, we have but one luxury!

At a time when lines are becoming blurred and where the very definition of what we consider luxurious is changing it’s encouraging to read of yet more vendors enjoying success on the NonStop – a rich bounty for all within the NonStop community. And a great feeling as well! But what truly is the biggest luxury of all? 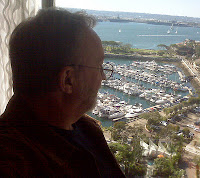 It was barely six weeks ago that I posted from Atlanta, Georgia, and yet here I am today in Vancouver, British Columbia, Canada. Pretty much a straight line diagonal from where I was only a short time ago. When I pull into the driveway later this weekend, I will have added 10,000 miles to the SUVs odometer. But the trip up here didn’t follow a direct path, as I squeezed in a weekend in San Diego and the picture above is of me admiring the view from the hotel alongside San Diego’s famous harbor.

While I have no emotional bonds with the Cadillac Escalade and I abuse it so frequently, it is still an effective way to soak up the long distances I cover. The thought of it being a luxury ride long since banished from all the wear and tear that comes with the miles it has accumulated, even as Cadillac is marketing the brand under the slogan of “we don't just make luxury cars, we make Cadillacs!” Nevertheless, almost ten years old with more than 130,000 miles on the odometer, there’s not a rattle to be heard from anywhere in the car.

I returned to the topic of uLinga in the most recent posting to comForte Lounge, that should appear shortly, if not already - check out the post "uLinga! Turning the corner?" that has just gone live for more about the recent wins! I am really enjoying watching uLinga show early signs of acceptance within the NonStop community. After initial success with an American supermarket chain it has now found success at an American service provider and before the New Year holidays get under way, it will likely win out again at a third site, and with each success it has provided support for mission-critical applications that are at the very heart of these companies’ operations.

All the more exceptional, given that the company behind uLinga, Infrasoft, has been in business a very short time and where the development of the product has occupied all of the “volunteers” time, as it demanded some pretty exhaustive coding schedules be met.

It may only be more infrastructure, and yet it is highly symbolic of what is happening across the vendor community of late. The NonStop Server platform marketplace remains sizable enough to attract even the newest of software endeavors to commit long hours, and potentially risky investments, all for the purpose of providing the NonStop community with choice. While many within the NonStop community long to see more solutions vendors working on the platform, it is the availability of critical infrastructure components that really are the key to future success of the NonStop Server. After all, if the platform continues to look proprietary, demanding skills not widely spread throughout the community, that’s not good for any of us! No, the trick today is to essentially hide all that is “proprietary NonStop” behind a veneer of openness that ensures any product in any market segment can take advantage of the NonStop Server platform.

It should be no more difficult to get running an application on the NonStop Server than it is to run it on any other platform. To paraphrase GM, HP doesn’t just make mission-critical servers, it makes NonStop! And this is an important differentiation in today’s crowded server marketplace. One very recent comment made in a discussion “Hi, Why Tandem Technology has (been) used in all Banking areas …” to the LinkedIn group, Tandem User Group, was in response to the challenges NonStop Server platforms have been facing in the Stock Exchange marketplace and it asked “the solutions you propose are incredibly good and efficient where downtime and data integrity are not priority (however) the need for speed has become a VERY EXPENSIVE game, who will pay for it? The clients?” And in following the complete thread in this discussion, it struck me of how luxurious a feeling we all enjoy from running our solutions on NonStop!

In the cover story in the Money section of the December 2nd, 2011, issue of USA Today the topic was that the definition of a luxury car has changed, and participating in the review were American executives from Cadillac, Hyundai, BMW and Lexus. What intrigued me with this article initially was the comment from the Cadillac executive who suggested that in the past “the definition of luxury was size, space, comfort, presence” but now luxury is defined more by “the feel of the vehicle”. While it may not be immediately apparent to everyone within the NonStop community there are certainly those of us who do understand that with NonStop Servers in support of their mission-critical applications, we do enjoy a luxury shared with very few in IT. NonStop Servers are just more robust and reliable than any other platform you may elect to nominate! And we can feel it!

Commenting on the opinions expressed by these auto industry executives, USA Today then quoted “luxury specialist” Pam Danziger, president of Unity Marketing, who observed that there were “blurring (of) the line between mass and class.” The paper added how Danziger had said “there’s a lot of it going on in the auto industry, making meaning differentiation tricky.” In particular, recent entrants into the luxury segment, Hyundai, “the higher-end cars even share the brand name and showroom with mainstream models …. undercutting the exclusivity” that is another attribute often associated with luxury. Again, there will be many within the NonStop community who can sympathize with this observation – yes, NonStop shares the same HP logo as the other servers on the “showroom floor” and even when addressing the needs of mission-critical applications, the same brand name can “blur the line between mass and class!”

Revisiting the discussion thread from the LinkedIn group, Tandem User Group, and already referenced above there’s considerable inference that with the commodity technology we can access today, it’s not too much of a stretch to consider building our own NonStop System – wrack up enough server instances, throw redundant fabrics underneath it all and hive off the storage to a self-managing SAN. Sure looks like a NonStop to me, right? Yes, it even has the HP logo! However, it’s not that simple.

It’s the age old issue of unintended consequences that ripples through these configurations that cause the outages we hear so much about – even in the marketplaces that pride themselves as much as they do on speed, Stock Exchanges. It simply takes a lot of time from a select handful of highly knowledgeable folks to assemble it all and then, as they roll onto more exciting projects, it’s all left to regular IT folks to maintain and support. Not an engineer on the planet will tell you that “adding more leads to something simple”, and the frustrations that are beginning to be expressed from the clients of some of these exchanges is beginning to be recognized by others – regulators, agencies and competing exchanges are all prepared to act.

Perhaps it was the sidebar commentary towards the end of the USA Today cover story that caught my attention. Hyundai’s executive suggested to all participants that “there is only one true luxury, and that is time.” Yes you can roll-your-own NonStop by pulling together the servers, network fabric and storage from commodity offerings at hand. But not only is it not simple, it takes a lot of time to sort through all the potential failure points, and to put together the complicated test plans that are needed to ensure you can truly determine if new applications properly take advantage of the architecture embraced by “the knowledgeable few” who put it together. Time that is often wasted by the unintended consequences from very minor oversights! Compare with the time that is freed when the system can be brought up pretty much as the packing crates and boxes are cleared away and returned to the shipping dock!

Yes, the showroom floors of auto dealers and computer companies share much in common. The branding spreads across a variety of products, from the most utilitarian to something much more desirable. In today’s business world, time continues to be a luxury commanding a premium and I have to wonder, when did it all happen that we thought we could steal some time back by doing it all ourselves? Perhaps not every markets for NonStop Servers will come back, as there remains a lot of other outside influences, but the more we understand the fragility of what we are making up today as we try and do it all ourselves, the more the robustness of NonStop and the time it give us, will feel like true luxury!
By Richard Buckle - December 03, 2011