Jimmy may have been a drawcard but NonStop has come a long way from its Tandem roots and recent user and industry events are highlighting much that is really new for NonStop! 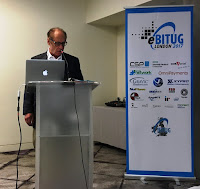 A casual reading of posts to Facebook or tweets to Twitter and the like quickly reveals just how much networking is being done today by those pursuing new business opportunities. Barely a day passes without someone or other highlighting a cityscape or a restaurant complete with a caption or two recommending the venue and the people. It isn’t as though I don’t do that fairly often but rather, just further examples of how so many of us turn to digital media – social as well as business – just to keep up with what is happening around the world. Then again, there’s still no substitute for networking in the real world

While it is a truism that the best laid plans of mice and men often go awry it came as a complete surprise to Margo and me that the very week of eBITUG would coincide with packing up our home, readying it for the movers that came this week. As a venue London and, in particular, that part of town close to the Tower always grabs my attention. The cityscape is now so different to when I worked there from late 1975 to early 1976 and yet, any chance to catch up with the NonStop community in London is always a treat!

Putting to one side any further excuses, now that the event has wrapped up and those participating in the 2017 pan-European eBITUG conference and exhibition have returned home, there has been a steady stream of emails arriving in my inbox. Perhaps it was the presence of Tandem Computers founder, Jimmy Treybig, pictured above (and a special thanks to my good friend Craig Lawrence for sending the photo to me) or the rooftop bar overlooking the Thames or maybe it was the content and enthusiasm that was on display from all those giving presentations.

All the emails were positive about the event – I didn’t receive a single email that contained any criticisms indeed in one, reference was made to a comment coming from GTUG member who said that not only was the event good for the NonStop community but that it would now be putting pressure on GTUG to deliver next year; a situation I think GTUG will warm to with the same level of enthusiasm as was on show at eBITUG.

So what were the comments and where did they come from? There were clearly positive comments coming from those of the HPE NonStop team that were present. But there were also positive comments from solutions, middleware and services vendors. One point that came up more than once – the opportunity to visit the “Shard” and enjoy the networking opportunity it provided and thanks have to go out to CSP for making it all possible. Well done!

OmniPayments, LLC., had a presence at the show and was part of the program. Observations that came from both Craig Lawrance and Jessica Nieves were very upbeat about the event and their responses to my inquiries were positive even as they addressed more than just what was central to OmniPayments’ participation. “vNonStop was probably the biggest talking point,” said Craig. On the other hand, Craig also shared a comment that was common to all responses that I received when he noted how, “Some attendees are saying the OpenStack software will be so expensive that’s it’d be cheaper to buy a NonStop X system!”

As for Jessica, she was even more forthcoming when asked about NonStop X she responded with, “I certainly saw that customers are either migrating or making plans to migrate from older systems to NonStop X” When pressed as to what trends she recognized that were developing among the NonStop user community, Jessica said. “The Cloud has been on the top of almost every conversation that I had. And it’s not just been at eBITUG, mind you, but throughout all the events where we have participated during the year, no matter the region of the Globe. Certainly modernization and continuous delivery are also topics of interest among customers and I heard it being openly discussed.”

Jessica observed that even at eBITUG, there were discussions concerning the need “to deliver new features or changes at a faster pace and having the tools and processes that support embracing such a faster pace is key. Companies are incorporating technologies such as big data, node.js, splunk, java frameworks to modernize and create innovative solutions – something that was also the topic of a number of sessions. And innovation does not end in NonStop!”

To this point, Jessica then explained that, “as a matter of fact, the Under 40 SIG that met during the event, is advocating for modernization and educational initiatives as it looks forward to growing the awareness of NonStop as a platform to run modern applications and attract young talents.  I was part of the Under 40 SIG meeting at eBITUG and had the honor of listening to the Tandem father saying words that I won't forget: ‘It's not about the NonStop platform, it's about the applications that run on it.  Going back in history, there was no need of Tandem, they needed ATMs!’”

All the numbers that were provided – number of registered attendees, number of end users, vendors, etc. – were impressive. It was left to Iain Liston-Brown, Master Technologist working for the EMEA Pre-Sales Organization to post on LinkedIn that, “We had about 258 registrations. Just over 1/3 were customers and a little more were vendors/consultants with the rest (50ish) being HPE. The customers represented 35 companies. Delegates came from the UK & Ireland, Europe (including Scandinavia and Eastern Europe, Netherlands, Austria, Germany, France, Belgium, Italy & Greece), Thailand, New Zealand and Australia plus the USA - so quite a broad spectrum!”

And then there was praise too for the HPE NonStop team involved in presenting the latest news about NonStop with a continued emphasis on NonStop being a lot more than what you may have seen with more traditional NonStop systems. Echoing what OmniPayments’ Jessica had said, it was the HPE source who reported that “Andrew Bergholz and Roland Lemoine (had) focused on what we have just delivered and what is coming next regarding Virtualised NonStop (vNS) and NonStop SQL/MX Database Services/Compatibility. ATC focused on DevOps, SQL/MX 3.5 Database Services and also Middleware/Microservices. So this was anything but legacy!”

All agreed with HPE that there had been a “Fantastic vibe, great vendor footfall and genuine interest from delegates across the two days. The vNS demo was running throughout the two days and all the customers and vendors were enthusiastic and glowing with praise.” And this wasn’t all that was said. According to Frans Jongma, Master Technologist, NonStop Advanced Technology Center (ATC) in a post to LinkedIn how, “the SQL/MX DBS demo was a nice thing to add to the vNS one. It only took a short bit of time to create an easy to access demo using iTP web server simple HTML pages that invoke the DBS API. Even I was surprised how easy it was; thanks to the booth staff for running the demo!”

There was acknowledgment by the community gathered at eBITUG over the pricing of vNS and OpenStack and that for many of them, simply upgrading to a new NonStop X made better financial sense. But that’s the point. If you have experience with the hardware and the integrated stack then stay with it. However, if you already have your x86 servers in place and are deploying apps along with data (provisioned as is done with clouds) then why not introduce NonStop to provide better availability whether supporting apps or even NS SQL/MX?The coverage of NonStop and clouds didn’t stop with the vendor community as it was left to TCM CEO Tony Craig to add a different element to the exchanges I was having, following eBITUG, even as he too posted to discussions that followed on LinkedIn. “Firstly, a big thanks to the eBITUG committee who delivered a really great 2017 eBITUG event. TCM, as platinum sponsor, was delighted with the turn out. We were extremely busy over the 2 days with considerable interest in our range of NonStop services.”Once again, as had been the case at last year’s NonStop Technical Boot Camp, an interesting and yes, somewhat poignant breakout presentation “Adapt or Die – The NonStop Skills Gap” by Daniel Craig, covered the well-known aging Nonstop community issue and how TCM is addressing this going forward by investing in their Centre of Excellence, youth training and System Management cloud based services. And yes, Daniel is another member of the NonStop community who is right at home in the Under 40 SIG that OmniPayments’ Jessica had referenced earlier in this post.What caught Tony’s attention? “Most popular was the TCM cost-effective cloud based Systems Management service which can complement and embed within an existing client's team or be the total answer for a client's system management needs, ensuring a complete end-to-end support solution. This is a Global solution and we certainly received global interest at the event!” And for more information about TCM’s services, Tony reminded me, just contact him directly at tony.craig@tcm.uk.com as I am sure he would like to hear from you. 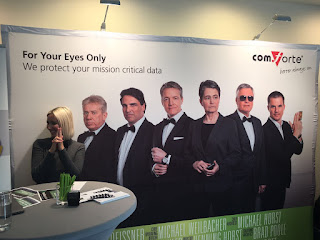 Occupying the booth adjacent to that of TCM’s was that of comForte and few have missed the pictures taken of TCM’s Natalie Craig blending in well with the stylized portrayal of comForte management in a James Bond setting. comForte made quite a splash with this James Bond theme which they carried through from the booth, the outfit of our guys and even in John Bycroft's presentation on Tokenization.

Among the highlights for comForte’s Thomas Gloerfeld, was the reaction coming from HPE NonStop EMEA boss, Dave McLeod. “He was excited about his NonStop business for the first 6 months - killed the targets - and remains bullish for the second half - continuing to grow.” From comForte's perspective, it was a “great event; busy with customer and partner meetings alike; managed to progress existing and uncover new opportunities.

We are now in the height of the Regional User Group (RUG) event season with many more to follow from New York to Dallas to Sydney. Some of these are being held in hotels, others in the offices of HPE and yet others in the offices of vendors. Of course, 2017 HPE Discover will be soon held in Las Vegas and that’s one I rarely miss. What is being showcased is a whole new story from HPE featuring NonStop – yes, we are now over the shock of NonStop X and vNS even as we embrace the new features (and compatibility) of NonStop SQL/MX – even as NonStop takes to the cloud.

Who knows what else HPE has planned and who dares second guess HPE NonStop at this time? What we do know, however, is that investment in NonStop continues even as the interest in NonStop gains further momentum. We also know that there is an Under 40 SIG that is gaining visibility with each event and shouldn’t be discounted but given greater support by all of the NonStop community.

Perhaps the enthusiasm evident in London will prove contagious and should that happen, the rest of the regional events planned for this year will be something none of us will want to miss – so yes, see you soon and hopefully, eBITUG will be the last large event either Margo or I miss for the remainder of 2017.