When you see the Southern Cross for the first time …

It may just be the lyrics from a popular song but so much about Australia that warrants further attention even if it is only a matter of sibling rivalry! 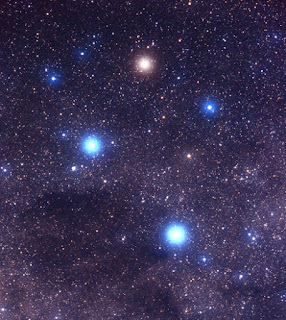 I have just landed in Sydney, Australia. Looking out the airplane window in the hours before we landed and as first light began to illuminate the night sky, the window perfectly framed the Southern Cross stars along with the two pointers that combined have helped navigators through the ages determine where the south celestial pole lay.

Taking up temporary residence to the north west of Sydney, the bush setting of these Sydney suburbs is just so different from anything you can experience in the US or Europe. It’s definitely a far cry from what I have become used to living in Colorado. However, sighting the Southern Cross is a reminder that Australia is part of the Southern Hemisphere. Even though Australia may be better known as the land down under, it surprises many of our friends in America that Australia is really much closer to the equator than they suspected.

When a country is bisected by the Tropic of Capricorn, it is a clue how far from the South Pole the country really is – New Zealand, on the other hand, isn’t as much beside Australia as underneath Australia. And like siblings everywhere, it’s also fair to say that New Zealanders wouldn’t welcome me saying something like this as they are far from comfortable with the thought of being underneath Australia no matter the context.

All of which is to say, perceptions can be very misleading. Reality, on the other hand, requires work and mandates considerable fact checking. Next time you pass a globe depicting the nations, take a good look at where Australia lies and you may be surprised by what you see. The other surprising fact for travelers to Australia is that as far north as San Francisco happens to be, that city is a lot closer to Sydney than Los Angeles. For those of us living in the U.S. we tend to forget how far west San Francisco is and how this cuts the distance between two cities that are oftentimes considered as being similar in nature.

However, perceptions aren’t just limited to Australia’s presence on a map. Yes, it is the Lucky Country and “we’re doing fine in the lucky country; doing alright ‘cause we’re making money down in the lucky country.” And yet, oftentimes, my American colleagues return from trips to Australia enthusiastic about all that they saw with the caveat that it’s a reminder of what America looked like decades ago. I would love to have earned a dollar every time I heard that it’s like America was, twenty years ago. Of course, Australians say something similar about New Zealand so this must be a trait in all of us. Fortunately, digging beneath the surface, there are many areas where Australians aren’t just progressive, but are world leaders.

Take banknotes, for instance. While the Aussie dollar has always been colorful, the country’s introduction of banknotes printed on polymer compounds rather than paper was way ahead of the times. And then there is the drive to a cashless society – contrary to what you may read may be happening in other countries, it’s clear that Australia is well down the path to becoming cashless. On arrival, we converted U.S Dollars to Australian Dollars only to be advised to ask for smaller denomination banknotes as many retailers do not accept the larger banknotes.

By the way, when it comes to credit cards, paying with credit falls lower in the list of payment options displayed on card readers at most retailers! Indeed, taking my newly minted chip card from Chase to any retailer in the country I am being asked for a signature whenever I select credit. But again, perceptions! Tap and go is huge in this country even as tapping lines of credit seem to be less popular than I had envisioned. However, as you scratch beneath the surface the one thing that is obvious about Sydney is that its occupants appear to be a lot richer than you might have thought with an economy that continues to boom.

Australia is in the news this week thanks to the visit by royals, Harry and Meghan. Our flight from San Francisco to Sydney seemed to be filled with participants and supporters of Harry’s Invictus Games and walking out through the airports security doors and into the public area at Sydney’s International Airport, we saw crowds of supporters from many nations, including the Ukraine and Poland, just for starters. But you need more than stories to describe Australia. After an absence of five years while there is much that is familiar there are many infrastructure developments taking place all across the city – just how many highways and train lines are being buried deep within tunnels connecting all corners of the city?

With a heritage deeply rooted in IBM mainframes and HPE NonStop systems, it isn’t surprising to read that it is the SIBOS Sydney 2018 event that has brought me back home. Anticipating some 8,000 plus attendees from the SWIFT community which, according to SWIFT, is “A global member-owned cooperative and the world’s leading provider of secure financial messaging services; our messaging platform, products and services connect more than 11,000 banking and securities organizations, market infrastructures and corporate customers in more than 200 countries and territories, enabling them to communicate securely and exchange standardized financial messages in a reliable way.”

While IBM’s fortunes appear to be in decline even as it is reluctant to step away from its love affair with its mainframes, HPE has invested heavily in the former Tandem product lines to open up new opportunities for the latest generation of HPE NonStop systems. If your perception of NonStop (nee, Tandem) is of a legacy system, then think again. The new NonStop product line is all x86 based, supports industry standard InfiniBand for its redundant interconnect fabric and, more importantly, can be configured to run not only on HPE’s hardware but on virtual machines deployed on anyone’s x86 platforms. Bringing the new virtualized NonStop to market and giving it support for VMware means you will be seeing NonStop applying its fault tolerance properties to clouds, particularly enterprises’ private clouds. Hybrid IT? Yes, you are going to see NonStop on both sides of the Hybrid IT ledger.

It’s fitting, of course, to be having this latest SIBOS event in Sydney for one other reason. Apart from the venue’s stunning location in Darling Harbor with views of the Harbor Bridge and the CBD skyline, it’s also coming at a time when Australia’s general public view on banks and financial institutions is at its lowest point in living memory. Just this past week, the head of the National Australia Bank (NAB) told the countries parliament that he was sorry for how badly behaved his bank had been.

And Westpac announced at the same time the firing of many of its staff along with the closing of many of its branches in the aftermath of it too having to genuflect before members of the federal government. So much money had poured into the country and its banks that it proved a recipe for deception and fraud. And it appears that the four cornerstone banks in Australia were all behaving badly in one way or the other.

Witnessing leaders of Australia’s banks now interacting with bankers from around the world can only prove to be a good thing for the country. As much as this might be an embarrassment in some banking quarters, I suspect that there will also be commitments by all of Australian financial institutions to change the very culture of banking in this country. Perception after all is oftentimes more compelling than reality so perhaps the sight of so many bankers willing to discuss the future of the world’s financial network with Australian banks is a good thing.

The country has a long history of picking itself up, dusting off past failures and ultimately succeeding – just think of how many challenges it took before an Australian yacht took the Americas’ Cup away from its hallowed pedestal inside the New York Yacht Club after 132 years! Or how many games it is taking before the nation’s rugby team beats the Kiwis just next door!

The Southern Cross can be seen on the Australian flag even as it is the Southern Cross that is “squirrelled away in that diamond” that is the logo of the Commonwealth Bank of Australia (CBA) according to a post published a few years back. In the back of my mind, however, as much as I appreciate Australia as being the Lucky Country, I cannot help but wonder if there is possibly too much of a good thing and whether or not, the country’s luck is about to change – Australia surely cannot continue this extended period of quarter over quarter growth (with no recession) indefinitely, can it? And yet, there has always been the Southern Cross overhead so perhaps, we are all asking the wrong question.

Perhaps, it’s really the last outpost for unfettered innovation mixed with a healthy relish to accept any challenge. Perhaps it’s the desire to forge new business models and succeed where others have tried and failed. On the other hand, perhaps the country is driven by an even deeper and more entrenched desire: Let’s just keep on beating our cousins next door - those pesky New Zealanders!