Living on the edge

A lot of images come to mind when discussing technology’s edge but nothing detracts from our understanding that it is the edge that now drives the core! 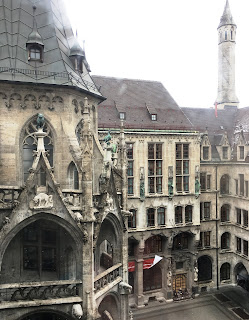 After having taken the two elevators needed to reach an upper floor walkway atop Munich’s “New Town Hall,” stepping out onto the small catwalk-like walkway that was part of the buildings bastion, the view of the city it provided was spectacular. This town hall dominates one side of Munich’s famous Marienplatz that is at the very heart of Munich. Even as snow had just begun falling – it was early March after all – it couldn’t detract from all that could be seen all the way down to the Alps peeking out from under the low hanging clouds. What came to mind almost immediately was the refrain, “Livin’ on the edge!”

Looking back through posts to this blog I was surprised that given all the talk of late about the edge, I had only made references to living on the edge in two previous posts – October 2, 2012, NonStop you! and then a couple of years later February 29, 2016, Files, logs, and backups … just keep it all rolling! The latter was a reference to gamblers and their lifestyles based on uncertainty while the former was a reference to business travelers and their lifestyles seemingly based on uncertainty too when it comes to airline travel. 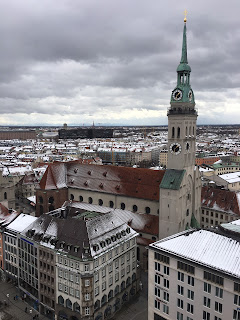 However, for today’s IT executive “living on the edge” has a completely different meaning, albeit many of them would express some anxieties about possible outcomes. Yes there is still a good view to be had of past technologies even as occasionally there are glimpses of what it is likely to appear next: What’s more relevant is that enterprises everywhere are facing the world of distributed computing, or client / server computing, all over again except this time the industry is calling it edge / core (cloud) computing. Whatever, mind you, no sooner will we have sorted it all out and deployed solutions beneficial to our enterprise, it will change. It always does … that’s the essence of IT.


As an analyst and blogger working with mission critical applications with a focus on payments, nothing illustrates the world of edge / core better than a HPE NonStop X system running a payments solution in support of a network of ATMs. I remind myself that there really is no substitute for experiencing IT in action and whenever I travel I inevitably head to an ATM at some point just to check out what ATM manufacturer a bank prefers and then what capabilities are on offer. Having said this it was during my last trip to Sydney, Australia, when I was completely turned off by what I saw in a branch office of one of Australia’s major banks.

It was a firsthand experience that I covered in my post of February 28, 2019, to the ATMmarketplace blog, Loose change: Time to lose the change? In that post I called out how I had to walk out of a Westpac city branch office in Australia as the diversity of machines was overwhelming and I couldn't quite figure out which machine was actually an ATM. Nearly two-thirds of one wall was set up to support businesses and a much smaller section was set up for the average consumer; a situation I put down to the branch location in the central business hub of Sydney.


My visit to Munich was a return to my roots in many ways as it was back in 1981 that I first ventured to the city having recently seen the U.S. company where I worked, The Computer Software Company (and a great name for a software company selling an OS to IBM mainframe customers at a time when IBM provided the OS for free) was acquired by Nixdorf Computers. A short time later I was present in Sydney’s inner city warehouse district to witness the very first Nixdorf ATM being uncrated - an ATM destined to be displayed at an upcoming computer trade show.


This time my visit to Munich included catching up with former colleague and now longtime friend, Bernhard Woebker, who was an executive with Nixdorf at the time Nixdorf launched an IBM Plug Compatible Mainframe (PCM) – hence Nixdorf’s interest and eventual acquisition of a software vendor in the Plug Compatible OS business. Bernhard went on to become President of the U.S. based Nixdorf Computer Eng. Corp., but now serves on the boards of a number of companies and continues to maintain contacts with former Nixdorf colleagues as well. When the topic of Nixdorf today came up, conversations quickly turned to Diebold Nixdorf and how its position in the world of ATMs saw it holding the top position.


The NonStop community blossomed as the intelligent front-end to many IBM mainframes and to put this into historical perspective, many IBM customers were running IBM ATMs. It was only a few years into this business that IBM sold its ATM product line to Diebold, so if you recall the badges on your ATMs as saying IBM, then you will probably recall this transaction occurring as it was one of the earliest “product unloading” instances at IBM that proved to be just the beginning. By the time the 1990s came around there were literally hundreds of tier one financial institutions running back office applications on their IBM mainframes, payments solutions that were including switching on their Tandem Computers, together with a network of Diebold ATMs. Today, Diebold has a million plus ATMs and equivalent Cash Dispensing Units under management – fully one in every three ATMs carries a Diebold Nixdorf badge.


Through Bernhard’s contacts I connected with Devon Watson, Chief Marketing Officer of Diebold Nixdorf, who in turn put me in touch with Mike Jacobsen, the company’s Senior Director, Corporate Communications. What followed was a highly informative email exchange that filled in many of the missing pieces. As is the case with many vendors that started out in hardware, Diebold Nixdorf today is transforming itself as it looks to become “software lead; services driven.” An all too familiar ambition for anyone who has been part of the NonStop community for the last decade, but when it comes to Diebold Nixdorf, even though it is starting out rather small, its software revenues are growing exponentially.


When it comes to the future of ATMs and the morphing of ATMs with Kiosks and other customer-facing products out at the very edge of the network, it is looking very good. Despite the nay-sayers predicting the end of cash and of the humble ATM going the way of the FAX machine, nothing could be further from the truth. “As banks and ATM deployers continue to analyze and ratify their footprint strategies they are considering both ‘market entry’ and ‘leave behind’ strategies,” said Jacobsen, “self-service / ATMs can play a pivotal role in the establishment and reinforcement of a ‘physical brand presence.’”


The folks at Diebold Nixdorf say that “the functionality delivered at that physical point of presence must then meet the needs of the demographics in that area / country / consumer segment being served. Our point of view would be that the self-service/ATM (blurred lines between ATM / kiosk) is very much a part of the digital strategy of a bank / deployer as their mobile banking platform would be – offering the same capabilities, authentication, authorization, and transactional support. But again, sometimes it will also handle physical media (cash / checks / etc.) and so it comes down to a deployment strategy and plan; and these ATMs, Kiosks and other customer-facing products can morph over time as consumer behavior and demographics change.”

What is inescapable here and was reinforced repeatedly by Jacobsen is that ATMs, in whatever form that they might morph to in the future, are with us for many years to come and with that, the networks they need will grow and the processing capabilities of the systems in support of these networks will likewise remain an important consideration. Of course, there’s even more in play here when it comes to discussions about what is morphing into what as Nixdorf has brought with it a substantial POS presence that Diebold previously didn’t enjoy. All of which is to say that HPE with NonStop, particularly the new NonStop X that is based on the Intel x86 architecture as well as the even newer virtualized NonStop (vNS), has a growing world it can support.


When you think of HPE NonStop today, Diebold Nixdorf might not come to mind and yet, they are the edge to a NonStop digital core and to the cloud, too, when you are running vNS. Knowing this, is it any surprise that every HPE PowerPoint presentation featuring its Mission Critical Systems product portfolio highlights how there is $3.6+ trillion in credit / debit card “charge volume” passing through at least one NonStop system every year. And growing! The edge will be everywhere, from the first point of contact a consumer has with technology all the way to where clouds interact with each other and the digital core of one business or function may simply be an edge to another business.


Expressed another way, it was ZDNet’s Larry Dignan who posted October 24, 2018, that:

Hewlett Packard Enterprise said it will invest in managing edge-to-cloud data, multi-cloud model and a consumption based model while continuing its own digital transformation.
CEO Antonio Neri said HPE is exiting 6 years of digital transformation work and now is in a good position for the future. Edge computing means that "millions of clouds will all be connected," said Neri. "Every edge to every cloud. That's the future and why I'm excited about the future of the company."

Living on the edge brings with it many images, from elevated platforms overlooking cityscapes and more natural wonders to rock anthems to technology outposts. When you consider all that HPE is addressing and where NonStop systems are playing a role, it’s inescapable that the future of NonStop will be heavily influenced by what transpires at the edge. And there is also no escaping NonStop’s history with financial institutions where support for ATMs, POSs, Mobile Phones and the Internet have played a very large role, which is even now shaping the future for NonStop. Living on the edge? “Exciting,” as Jimmy T himself would say; “isn’t it!” 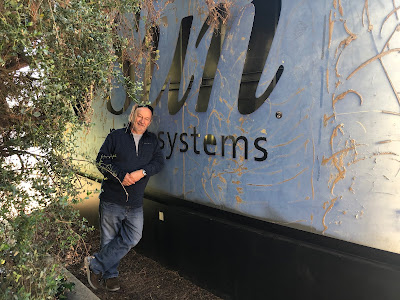