Reengaging with the NonStop community as changes to NonStop keep on coming may still be a challenge and yet, they’re hold promise for those with the skills learnt on NonStop! 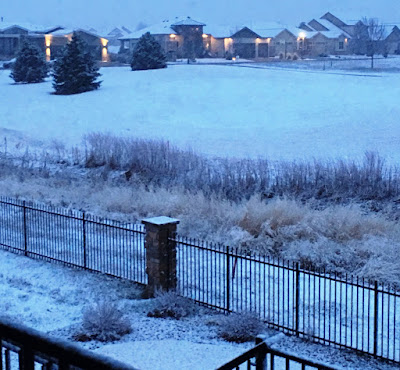 Woke up the other day to an eerie glow emanating from a frozen landscape as winter reminded us all that while the calendar said spring, it wasn’t done with us, just yet! Living alongside Colorado’s famous Rocky Mountains there is always something going on and as much as I shivered and pulled on warmer clothes, in its own way winter was providing a beautiful spectacle. It didn’t last long. It never really does around here. As the temperature climbed into the high 40s, the snow quickly melted away and perhaps it will be eight or nine months before we see anything similar again. On the other hand, maybe we are speaking too soon.


Having returned from our trip to Munich, Germany, it’s now time to plan for Edinburgh, Scotland. The premier user event for the European community is only a few short weeks away. Margo and I will both be in attendance and if you have looked at the agenda for this European NonStop Technical Boot Camp (ETBC), hosted by BITUG, you may have already noticed I will be giving a presentation on data – the plenary presentation Tuesday, immediately following lunch: NTI Strategy and Business Update: From Replication to distribution, integration and transformation; it's all about data! For all those planning on attending, I sure hope I will be able to pull you away from your after luncheon naps.

If as yet you haven’t registered for this event, then you may want to follow this link https://www.bitug.com/tickets and while you are there, check out the agenda to get information on all of the presentations as BITUG Chairman, Collin Yates, together with the rest of the BITUG committee have ensured that there are plenty of sessions to choose from. Again, hope to see you there! HPE will be well represented at the event and where Neil Davis, EMEA NonStop Enterprise Division Director will be joined by Teresa Sorg, NonStop Engineering Director. Their Tuesday morning presentation HPE - State of the Nation and Development initiatives will be a session not to be missed!

While the image of throwing aside the mantle of winter may be a bit much and more than a little melodramatic, there is no hiding from the image of a NonStop attracting much more of the HPE spotlight. We are being advised quite candidly that this will be the year where more NonStop users migrate to NonStop X, even as there are suggestions being made that virtualized NonStop (vNS) will generate a lot more than simply passing interest as it takes its first tentative steps on what will likely be a very long journey into the heart of the data center. There are many questions to be answered of course but HPE has already rolled the dice having announced eight NonStop community vendors as providing additional go-to resources for modernization and migration services.

Whenever we talk about NonStop attracting more of the HPE spotlight, this isn’t just hyperbole. There is no getting around the sizable investment HPE has made in NonStop over the past decade nor the pride HPE takes in having NonStop present in some of their biggest blue-chip accounts. In talking to the members of the HPE Influencer program, none of which have come from NonStop, there are always questions coming from them about what NonStop is up to today. And the interest is genuine and a reflection of just how much catch-up is going on across the larger HPE community – NonStop isn’t going away and yes, now that NonStop has become open and embraced standards there isn’t any reason at all not to incorporate NonStop within any enterprises’ ecosystem of processors.

“The most common tools that enable (DevOps) are Jenkins, Ansible, Git, and Nexus,” wrote Justin Simonds, Master Technologist, HPE, in an article published in the March – April, 2019 issue of The Connection. “All of these tools can be used with NonStop. Many of the tools can run directly on the NonStop if that is preferred or the NonStop can be integrated into the tools running as a corporate standard. If your company is embracing agile and DevOps know that NonStop can be a part of the infrastructure and standard.” The arrival of NonStop X and vNS is indeed game-changing in the sense that they break down any remaining barriers that may exist within the enterprise that fence-off NonStop from greater participation inside its data center.

This post isn’t just about NonStop X and vNS. Rather, it’s a look at the people that make up the NonStop community. On LinkedIn this weekend was a rather interesting post encouraging each and every one of us to help out those who are looking to reengage with us - it wasn’t targeting the NonStop community, but it made me think. How many of these messages do we see each month as the depth of NonStop talent simply warming the benches continues to grow? As much as I enjoy the growing presence of the NonStop Under-40 SIG, I am just as keen to figure out ways to help those more mature ones, so to say, who are just as keen and want to return to supporting the NonStop community – users and vendors alike! We are the sum of everyone, engaged or and looking for an engagement.

For the most part, those looking to reengage with the NonStop community possess the skills that enterprises are looking for today – including all of the tools and utilities Justin wrote about. Analysts and coders have kept up and can contribute right out of the gate. Some of them even have truly in-depth knowledge of the internals of NonStop having been a part of NonStop development going all the way back to the days of Tandem Computers. These are highly valued resources every enterprise can benefit by recruiting. What’s more, with the  LinkedIn messages I have gotten of late, the advent of OSS has opened the door so much wider when it comes to supporting new tools and utilities that almost everything is possible on NonStop – once skilled with NonStop, you might like to say, always skilled with NonStop!

Point is – there is a market shift underway. The once dominant position for NonStop among financial institutions and telcos is lessening, in some regions, even as new applications including manufacturing, transportation and distribution, are growing in other regions. Not by accident is there a concerted effort to stall future deployments of NonStop into financial institutions as competition pushes new initiatives including open banking. In their evangelical zeal these new competitors are branding NonStop as legacy – a label that just doesn’t make any sense when you think about it, given the delivery of NonStop on Intel x86 architecture, together with the delivery of NonStop support for deployment atop hypervisors, including VMware. The NonStop community needs to push back on this aggressive and somewhat reckless behavior demonstrated by the competition. These competitors are simply ill-informed, but it really is up to us to “educate” our enterprises in this regard.

However, be that as it may and NonStop has always welcomed competition for more than four decades now and still remains the premier platform for mission critical 24 x 7 real time transaction processing. It’s just what a NonStop system does – and does well. The world of NonStop may be orbiting around the twin stars of edge and core and that’s OK too; NonStop as software can live on the edge even as NonStop as a system can live inside the core. This has been a consistent theme of NonStop supporters now for quite some time and the arguments as to where NonStop best resides are becoming tiresome – where there are transactions at the edge or inside the core, this is where you can find NonStop. Want to know more about how to make a better contribution to your enterprise or how best to become better known for your skills across the community?

“As you know we are in continuous learning in our careers; the trick is picking what to learn and at what level,” said Simonds in an update following the publishing of his column. “The NonStop skills will be applicable as long as NonStop remains a viable platform (and), so far so good.  I firmly believe that enhancing those skills is a way to improve chances for employment.” Returning to the topic of DevOps, for instance, “So understanding the agile precepts and how DevOps plays into that I would believe would help people find work.  If you add DevOps to your LinkedIn profile – how many additional ‘looks’ will you get?” If this appeals to you and you want to reengage, perhaps you should take a closer look at the material being covered by the NonStop Academy via the web portal. Have you seen the promotion for the April 17, 2019, customer webinar, NonStop DevOps Utilizing Continuous Integration and Deployment – it’s free? To find out more, check out the web site https://www.nonstop-academy.com/upcoming-calls/.

Even so, the many skilled NonStop developers, testers, deploy-ers and such wanting to reengage have seen this all before – yes, we will always be in this cycle of continuous learning. You may even recall how the Cupertino campus was reorganized when it was realized that Client / Server computing would demand a rethink when it came to the software needed to support such a major shift – core versus edge? We have seen it all before, right? And the skillsets honed over decades can be put to use immediately – just ask those wanting to reengage with us all. “They just know stuff,” continues to resonate well with us all!

The news that yet again, winter is going to hit North America hard over the next couple of days is yet a further reminder than spring still has work to do to turn back old man winter. For the NonStop community and for all those looking to extend their careers with NonStop, there is a growing sense of renewal following a large an investment that HPE has made in NonStop and to reengage with IT and bring value to the table, the skills honed on NonStop through the years are every bit as valued as they have always been and to quote a popular tag line, all that’s now left is to go out there and just do it!
By Richard Buckle - April 09, 2019