Three more wishes coming soon – the path ahead for NonStop.

So, another three years have passed by and I find myself writing a preview of what I will likely focus on in eighteen months’ time – my next three wishes for NonStop! 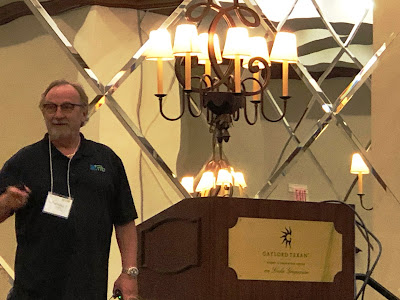 It wouldn’t be fair on my family if I said 2019 had been a routine year for Pyalla Technologies. It started with the return flight from Sydney, Australia, and continued with three separate trips to Europe plus a lengthy road trip to Las Vegas for HPE Discover 2019 combined with stops in southern California and participation in N2TUG back in Texas. The miles have added up but all the while even as the adventurous life continued to unfold, there was so much news coming out of HPE that scarcely a day passed without a discussion or two over what it all means.

Margo and I have our roots firmly anchored in NonStop, dating back to Tandem Computers where Margo had risen through the development organization all the way to the COO role under the stewardship of Bill Heil when Bill headed the NonStop Software BU. As for me, I sampled Tandem from inside almost every group within the company, starting with roles in sales and marketing in a country outpost, followed by a program management role in development, a short stint in product marketing all followed with a management position in product management. All of which is to say, between Margo and me, we have seen an awful lot happening with NonStop over the many decades we have worked with the platform.

Then again, according to my family, whereas Margo knew exactly where she was headed I was always on the lookout for the next fork in the road.  However, being part of the original S-Series program team, representing networking, I was privy to the major pivot away from traditional packaging of systems to where we introduced ServerNet, externalized WAN connections while integrating LAN connections and yes, switching from custom chipsets to MIPS Risc processors. Listening to Bob Horst explaining “worm hole routing” was an experience all of itself and in case you ever wonder about it, the introduction of ServerNet led to InfiniBand.

I recently came across an interesting explanation in a Linux focused Gentoo Wiki article:

“InfiniBand is a high-speed serial computer bus, intended for both internal and external connections. It is the result of merging two competing designs, Future I/O, developed by Compaq, IBM, and Hewlett-Packard, with Next Generation I/O (ngio), developed by Intel, Microsoft, and Sun Microsystems. From the Compaq side, the roots were derived from Tandem's ServerNet. For a short time before the group came up with a new name, InfiniBand was called System I/O.”
I only reference this explanation over the origins of InfiniBand as I have been asked about it many times ever since NonStop X was announced, but the story continues as today NonStop also supports RDMA over Converged Ethernet (RoCE) which is proving to be very important for the future of NonStop. When it comes to predictions and wishes it’s good to know about the underlying mechanics. After all, as this is important when it comes to breaking down barriers and giving NonStop the new label I have really warmed to, NonStop: No Limits!

With this reference to predictions and wishes, I am not entirely sure when the idea came to me to speculate on the future of NonStop but it was back in February 12, 2008, with the simple post, "My Wish" for NS Blades. In that post I wrote of the three wishes I had for the NonStop of the day and every three years since that post, I have provided an update under the general heading My Three Wishes (for NonStop) and you can click on the label Wishes (right-side of blog and all the way to the end) to see them all. However, predicting the direction in which HPE will point NonStop every three years left a whole lot of time without any further updates so it was only in the July 19, 2013, post Are our wishes still important? that I started previewing what to expect in the next update, eighteen months later. To see those prior previews, just click on the label Wishes - Preview.

With this introduction complemented with a little background information, what then will I be wishing for in February, 2020?  In my previous post of July 25, 2019, to this blog, Working on my rewrite; NonStop evolving its endgame (for now)! I let slip a couple of ideas that I had, not the least being the complete morphing of NonStop into a feature accessible by everyone needing solutions that run 24 x 7, forever. I referred to this as one possible goal for NonStop labeling it, NonStop: Endgame a play, obviously of the success of the film, Avengers: Endgame. But before providing more details about what my three wishes for NonStop will likely be when they are addressed in February 2020, let me be very clear.

In this previous post already referenced above, I do add the words, “for now!” And that’s important too as there will be many more endgames to follow. For now, however, focusing on the immediate future makes a little more sense as we should be able to see how any outcomes covered here could come to pass. Wishes are only of interest if the connections to them are real and the leaps of faith required are anchored in believable technology. Although, when I wrote that first post, "My Wish" for NS Blades I predicted that when it comes to wishes:

“…my first wish is to see HP BCS deliver on the slideware Martin Fink first unveiled as the “Shared Infrastructure Blades” package. This is where any mix of NonStop, HP-UX, Linux, and Windows Server OS’s will be supported.

“…my second wish is to see a hypervisor introduced where NonStop can be configured as a “guest OS” in much the same way z/VM is used on the IBM mainframe. The trick here is to see this introduced without marginalizing the traditional association between NonStop and the hardware with respect to being fault tolerant.

“… my last wish … then wouldn’t it be advantageous to users if interrogation of the incoming transactions would direct mission critical transactions to NonStop, important informational but not quite mission-critical to a Unix or Linux, and voluminous inquiries to Windows? A variation on today’s workload balancing products, but supporting a transaction profiling capability that once set up, learns about the overall mix of transactions, and automatically adjusts the OS configurations on the fly?”

Remember, I posted this back in February 2008 following the announcement that NonStop would be running in HPE Blades. This was at least half a dozen years before the announcement of NonStop X and well before there was any discussion about the potential for virtualized NonStop (vNS).  So, where is NonStop headed? In general, the die has been cast. In my opinion then we have passed the stage where NonStop as software any longer surprises. That horse has definitely left the barn and you can barely see the dust it kicked up in the process. However, here is where it gets very interesting – the go to market plans and the sales channels. HPE has done a good job with the architecture and the technology but the shift in focus is going to be on selling NonStop far and wide. As HPE CEO Antonio Neri is telling us at every opportunity of how HPE is pursuing high-value opportunities for HPE products and is no longer building for the high-volume market place. Nothing in the HPE portfolio provides greater value to IT and the business than NonStop.

Here’s the scoop – HPE is transforming technology, people and processes and economics. This in the eyes of HPE executives is a sustainable journey and as such, brings focus on data, the edge and cloud. Three families of systems – ProLiant, Synergy and Apollo provide the building blocks and address what’s needed on this journey. Anticipate therefore, that the NonStop: Endgame (for now) will see NonStop on ProLiant, Synergy and yes, Apollo – all driven naturally enough by customer demand. We still have the topic of memory-driven computing that leverages The Machine and that too will see potential for NonStop but that is a technology that will find its way into the Apollo platform. SGI, Cray and maybe more will all have access to The Machine and it will push specialty processes including GPUs and perhaps Quantum to the perimeter of massive amounts of memory. But even here, when you study the details of the graphics provided by HPE to date, there is a space to plugin NonStop where situations call for 24 x 7 message handling (and yes, data).

In other words, if your sales models are leaning heavily on channel sales then those vendors already in relationships with HPE for specific products are all going to have the option to check the box, as it were, to have NonStop enabled for a solution. Any solution; it’s an always-on, always-connected world that is only becoming even more connected! So, just a finite number of systems families with an infinite number of channels – a model that will only prove successful when NonStop isn’t complex. In closing then, look to see NonStop become more deeply integrated with the hypervisors and metal and see the APIs simplified to where NonStop: Without Limits is only a click away! Stay tuned for all the skinny on this coming to you in February, 2020!
By Richard Buckle - July 30, 2019