Recent travels created memories; for HPE NonStop, the coming of dawn bodes well for a spectacular and bright future for the new NonStop! 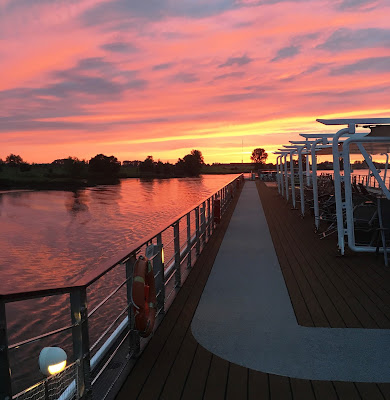 Memories of travelling the rivers and canals of Europe remain fresh. It wasn’t all that long ago and every time I reach for the phone there is a picture being displayed that does a very good job of opening the floodgates to these memories and they just come flooding in. I guess it would be unrealistic to expect that they will last forever, but all the same, one of the reasons any of us ventures far from home is to create new and lasting memories. On the occasion when this photo was taken, I had just strolled to the top of the boat and onto its “sun deck” to check on how far we had travelled overnight when I was greeted with this spectacular sight. I hadn’t expected to see this red a sky emerging with the dawn but it was hard to ignore!

While the passage of time seems to accelerate through the years, as I looked to the horizon from the boats sun deck all was peaceful and yet I knew that as we traveled deeper into the countryside there was a possibility for afternoon storms to develop. All the same, it was a scene that stopped you in your tracks even as it suggested a moment to pause and admire. To simply take it all in and yes, relax! It was only a short time later that the morning’s red colors faded and the clouds dropped out of sight leaving behind a radiant, bright blue sky!

When it comes to IT today, there are moments of brilliance that are oftentimes missed. Perhaps not to the extent of lighting up the morning sky, but definitely bright enough to catch the eye of those who may be close by. HPE has been very busy this year filling in many of the pieces first described in its vision and strategy statements and there is much the HPE community applauds. Clearly, just being the first to place as much emphasis as it did on Hybrid IT HPE placed itself ahead of the mainstream – yes, according to HPE CEO, Antonio Neri, HPE had been the “first to say world will be Hybrid.” However, it turns out that this was merely the first glimpse of what was to shine even more brightly with the passage of time.

Identifying and then labeling the world of IT as being a Hybrid world seems so obvious now, so much so that many IT professionals may have missed its significance. However, by 2015 HPE was already talking about Hybrid IT and when the company announced HPE Synergy, it was left to Neri to say:

“Market data clearly shows that a hybrid combination of traditional IT and private clouds will dominate the market over the next five years,” said Antonio Neri, Executive Vice President and General Manager of the Enterprise Group at Hewlett Packard Enterprise. “Organizations are looking to capitalize on the speed and agility of the cloud but want the reliability and security of running business critical applications in their own datacenters.”

My earliest references to Hybrid Computing came in a post of June 8, 2015, when I described my impressions following the then-HP Discover 2015 event. However, going back to 2014 I wrote of how then-HP was introducing Converged Systems that were coming from “different development groups and delivering hybrids all nicely tested, configured and with a common operational interface.” However, a lot has changed during the intervening years, so much so that barely a press release is published without some reference to data processing being carried out on one form of Hybrid IT or another.

For the NonStop community, this is really good news as the coupling of a traditional NonStop system to clouds or the other way around, having a cloud, populated by virtualized NonStop, coupled to traditional servers is the realization of aspirations formed inside of Tandem Computers a long time ago! Whether you want to view NonStop as perhaps the first true programmable networking front-end processor or perhaps as an early entrant into the world of database servers, there really isn’t hiding the fact that NonStop was always deployed alongside something else. Such hybrid configurations helped prioritize software development, whether it was support for file transfer products like NDM (now known as Connect:Direct), SNAX CDF – the first and only implementation of IBM’s SNA PU4) – and monitoring software, like NonStop NET/MASTER.

Not every program in support of better integrating NonStop with what was beside it fulfilled the initial ambitions of the program, but as time progressed NonStop embraced open software and industry standards. In so doing, it became easier to program and operate NonStop and so it is today that under the oversight of HPE, NonStop plays a critical role in HPE’s Mission Critical Systems organization. Offering the ultimate in uptime, NonStop finds itself without peers when it comes to availability for true 24 X 7 operations. However, this is where the storyline diverges from the initial goals set for the original Tandem Computer. NonStop, the system, is becoming NonStop, the service.

As HPE’s Neri explained at HPE Discover 2019, when it comes to infrastructure available today from HPE then this is all about to change. “Everything-as-a-Service; any workload, anywhere!” Giving this a little more clarity, Neri said, “I am committing to you that in the next three years, HPE will be a consumption driven company and everything we deliver to you will be available as a service.” Even as we are adjusting to the new reality that NonStop is nothing more than a collection of virtual machines, exposure to those virtual machines will disappear behind infrastructure increasingly cloud-like in terms of “elasticity of provisioning”, or as we refer to it these days, composability. Infrastructure as software and as manipulable as anything we interact with today – easily becoming just another set of selectable icons on a laptop or smartphone. Yes, I want the option to run 24 x 7!

For the NonStop vendor community this is both a likely attractive godsend even as for others it may prove to be unattractive. On the one hand, mess up the pricing and a vendor could end up simply migrating its customer base to a much lower priced alternative. On the other hand, suddenly demonstrating, testing and performing PoCs / Pilots can be undertaken by prospects without any need for expensive hardware purchases or software licenses. It’s safe to say that there are many wise heads now playing with the numbers to determine the optimal pricing for NonStop-as-a-Service, but for now, it hasn’t yet been established and I can’t take too seriously the pricing for NonStop on NS2 (virtualized NonStop (vNS) on HPE sourced ProLiants) all that seriously as it surely is just a one-off in order to bring the virtual NonStop to market.

There is a temptation however for NonStop vendors to explore building their own global “solution-specific” private clouds based on vNS. By now we have all read of OmniPayments building out such an environment as part of its deployment of OmniCloudX. “This has been a boon to OmniPayments as it has allowed us to support prospects introduction to OmniPayments including running PoCs and Pilots but also, during any period where they are without a NonStop platform, traditional or virtual,” said OmniPayments, LLC., CEO, Yash Kapadia. Some features of OmniPayments can coexist with other vendors payments solutions – OmniPayments  Preauthorization Engine / Fraud Blocker for example has been deployed alongside BASE24. “Having the option to capitalize on our approach to OmniPayments-as-a-Service in this manner,” said Yash, “goes a long way to endearing us with our prospects; no cash up front is always attractive for potential customers!”

Returning to Neri’s unambiguous statement, “HPE will be a consumption driven company and everything we deliver to you will be available as a service,” there is something else the NonStop community needs to consider. From every conversation that I have had since HPE Discover 2019 it is clear to me that the execution of this directive will involve HPE’s partners. Greenlake, and it’s portfolio of partners are at the fore in this regard even as Greenlake itself will be stepping into the business of supporting the edge and other infrastructure as a service. “We are at an inflection point in the market,” said Neri in a press release. “Everyone recognizes that customers want technology delivered as service, but they also want it on their terms. HPE’s unique approach to as a service, which empowers customers with choice, flexibility, and control, is driving HPE Greenlake’s tremendous success.”

Given Greenlake’s penchant for being able to point to a growing number of enterprises that it supports, the only question remaining for the NoNStop community is when Greenlake will point to HPE’s own IT organization to say, “HPE IT runs NonStop and supports the NonStop SQL/MX on the basis of DBaaS!” This scenario was covered during a discussion between the Greenlake team and a group of HPE Influencers at HPE Discover 2019, so fingers crossed that it will develop traction and indeed momentum inside of HPE as after all, every potential customer of NSaaS would want to know that HPE is “eating its own dogfood!” And in a way, you couldn’t point to a better reference considering how many support / maintenance contracts for Oracle were retired.

Cloud-watchers and early risers who look at sunrises all know that over the span of just a few minutes, the sky will change. What was once just a foretaste of the day that lay ahead will be replaced by the sun itself. What may have been in the shadows comes into full view and more often than not, is a spectacle all unto itself. For the NonStop community, for now we can only see the sun’s corona – it’s outermost layer – but we all know the substance that will follow. However, just as we know what will transpire with the sun each morning, NonStop is ascending and for that, it has to be said that HPE was not only first with Hybrid IT, first with Converged (and later, Hyperconverged) and first with Composable but it must also be said, first with delivering fault tolerance to the cloud!

The new abnormal – if the shoe fits, right?

Call it the new normal, the not normal or even the new abnormal, our world as we knew it when we celebrated the new year is long gone; on ... 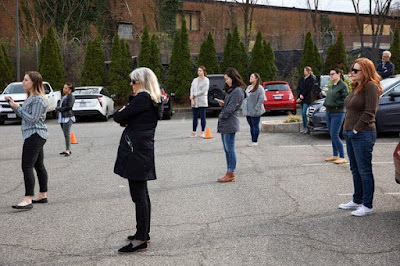