Driving through a scorched landscape with little left to remind us of its former beauty, it begged the question: Are we torching (our plans) to retain on-prem IT and do we have a path back? In the last post to this NonStop community blog I wrote of how we had few plans to drive the Sierras any time soon. A reference in passing to the times we have driven to Burlingame, California, for the annual NonStop Technical Boot Camp (TBC) event. The reference was followed by remarks about taking away any opportunity to drive somewhere as being a real downer for Margo and me. Well, that all changed over the course of just a week although we really didn’t cross the Sierra divide to head into the Bay but rather, we drove a southern route that took us into the greater Los Angeles area.

Call it being optimistic about our chances of escaping the global pandemic but the opportunity presented itself as almost a last minute development. We had been on the phone with a number of clients of late after which we realized that we hadn’t really talked to anyone face-to-face since we returned to Colorado very early in March. Spending my days posting to social media outlets was beginning to feel rather hollow without any real social interactions so we set about catching up with folks we know inside and out of IT.

I have to tell you, putting another 3,000 plus miles on our car’s odometer felt really good. We had read all the updates about travelling safely and we followed the protocols to the letter. We gloved up each time we stopped for gas and we switched to fresh masks routinely. We had packed hand sanitizer and we stayed in hotels that taped-off their rooms prior to our arrival and post cleaning. We only exchanged towels with housecleaning once and kept all interactions to a minimum. However, we did stay with friends in Simi Valley and had a blast – it was his birthday and having partied with him a decade ago, we weren’t about to let him down because of COVID-19.

One memory we have taken with us is of the devastation left behind by a number of wildfires. Drive up the famous California State Route 1 or as it is better known, particularly when it takes you by the coastline of Malibu, the Pacific Coast Highway (PCH). Further north as you head to Monterey and Santa Cruz, it becomes the Cabrillo Highway. As we headed north out of San Simeon, we encountered our first sign of burnt-out headlands and the blackened vegetation continued all the way to Big Sur. We have seen many firefighters next to their trucks, on the ready! Much later, as we headed home we traversed the Glenwood Springs canyon we saw even more devastation as fires had burnt all the way down to the Interstate.

As a business trip it didn’t meet all of our objectives as some meetings were postponed even as another was cancelled but it’s hard to say that we were surprised. Then again, we had to see for ourselves how everyone is adjusting to this new normal – a normal that with each passing month seems to indicate that we will be living with the changes it has wrought for some time. Then again, being able to talk to folks also meant we were being constantly reminded of another natural phenomenon – cloud formations.

For the NonStop community adjusting to a world that is increasingly hybrid, the number of times we were told in no uncertain terms that this or the other IT was heading to an all-cloud operation. It bothered me that so many of us simply go with the flow and don’t take the time to really ponder the bigger issue – will the enterprise retain skills enough to monitor a public cloud provider and to be in a position to move on-prem mission critical applications as the need arises?

You may have missed it but there is an increasing number of posts to LinkedIn promoting the idea that we will never have to buy another server ever again. While the cloud has successfully demonstrated its ability to handle vast amounts of data even as it offers a veritable buffet of applications, it really should be considered as just another resource and evaluated on that basis. It’s not solely about security that has some IT groups concerned, but rather, yet one more instance of vendor lock-in. After decades of trying to embrace standards and open systems, suddenly we only too keen to launch into one cloud providers model and pay the price accordingly.

Cloud lock-in is real. Even as is being locked-in to that cloud providers subscription model. There really isn’t any magic when it comes to clouds. If you want to run mission critical applications 24 x 7 and have all the necessary files and databases available 24 x 7, then the resources the cloud provider commits to providing that is about the same as what you would already have deployed in your data center. And it will cost much more than what you have deployed. Sure you can trim your IT staff but to what extent – will the cloud provider know your applications and your customers the way you do? And if you watched Steve Kubick’s video, the 2 minute failover? it’s clear that enterprises support of mission critical applications cannot afford to sit back and wait for two minutes as a system recovers.

I am appalled at how many IT professionals are skirting the issue of imminent proprietary deployments that lessens any idea about portability – and no, higher level frameworks offering multi-cloud deployment simply move the bar a little higher as they lock you into their own middleware. And such middleware doesn’t come cheap either in financial terms or in terms of adding new skillsets to your IT group. Then there is the network – happy to connect to your users and business partners where there could be thousands of IP addresses over the net?

Clouds are a resource plain and simple. For the NonStop community there is merit in considering moving data to a cloud where analytics applications will mine the data for useful information that could affect business outcomes. There is also merit in turning to the cloud as another vehicle within your overall business continuity plans. You might even turn to the cloud for use as a back-up resource. There are good reasons to consider using the cloud but for the NonStop community, it’s just another option to be considered.

The latest NonStop systems remain cost-effective option for all mission critical applications. Enterprises are now moving off other platforms and onto NonStop and for good reason. I have come across anecdotal information that suggests that there is Asia / Pacific and Japan enterprises that have successfully migrated off of Oracle / Linux onto NonStop with relatively little fuss. Bringing any Oracle application, whether housed in a server farm or in a public cloud, is now easy to do and is a real bonus for those enterprises looking to reduce their financial commitments to Oracle. Didn’t you read that this is exactly what HPE IT concluded and then implemented – NonStop SQL is at the heart of much of what HPE does these days.

No blogger, influencer or journalist is suggesting that you pursue a scorched earth policy. This is not the time to burn the boats once you have landed. Rather, it’s a time to give serious thought to just how effective is the hybrid configurations of NonStop and clouds; where it makes good business sense and where it doesn’t. It takes a long time for a torched forest to return to any semblance of its former glory – will you leave your enterprise scorched and unable to remain in business simply because you let go all the skills IT needs today?

Our road trip really highlighted the damage forest fires inflicted on both California and Colorado. The air still smells smoky around our northern Colorado home and the smoke haze is still with us. Yet, colorful Colorado is at its very best right now and stands in stark contrast to what we saw alongside America’s highways further west. But with colder weather in the forecast, these hazy skies will dissipate at some point and we will once again begin to enjoy the fresh air that continues to attract so many visitors to Colorado. Are you prepared to inflict something similar on your enterprise and have you given any consideration to just how long it would take to see cloudless skies once again?

Regaining our composure; watching for signs!

Attending virtual events with more to come, the signs suggest that this is now normal; have you composed yourself ahead of what’s to come? I... 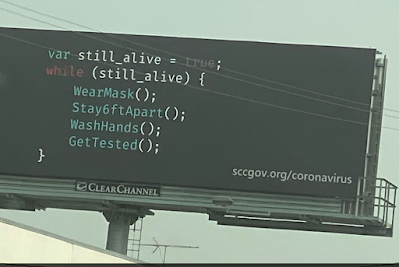