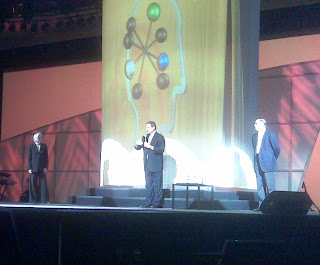 It has been a tremendously eventful morning and I have just returned from giving my presentation. This means that I can unwind for the first time this week and relax a little. I can also begin to break down what I heard this morning at the General Session, and look at what the future holds for HP as well as for the user community, although many of the details I will discuss in a later blog posting, after I have had a little more time to reflect.

But as Ann Livermore pointed out – this week there were just two press releases, BTO Software for Change Management Automation, and the Integrity NonStop NB50000c BladeServer. As Martin Fink and Randy Meyer told us later - just two announcements? From a company the size of HP? This was a remarkable achievement all by itself! But for attendees at HPTF, it was all about Blades. Everything to Blades!

Prior to Anne taking the stage, we heard from Randy Mott on how far HP had come with their IT Transformation, and how the clock was winding down. All the goals Randy committed to accomplish have to be met and completed by October 31, 2008. Even so, I saw no evidence of Randy sweating, or being overly concerned about how much time was left.

What has been accomplished so far is pretty amazing, in terms of taking an extremely large infrastructure – 85+ data centers, 750+ data marts, 18,500 switches, 420,000 ports and more than 6,000 applications – to where today there’s just six data centers in three cities, and where only 117 data marts remain (597 data marts have been retired), and at the heart of each of the six data centers are Neoview complexes made up of 128 servers (256 processors) and 182 Terabytes of storage, each. Some of the timelines (for information access turnaround) have seen improvements of as much as 48 hours!

In short, Randy placed some bets in terms of investments and as he now oversees an IT department with the data centers in place, he realized a reduction in IT spending from a little over 4 percent of revenue to just 2 percent of revenue – even while the pace of acquisitions and mergers didn’t slow down for one moment.

In a previous posting, back on November 11, 2007 “We all just wanna be big rock stars!”
I quoted a report in the Financial Times (Wednesday, Nov 7th) that reported “Randy Mott’s trail-blazing project to overhaul HP’s technology could set the standard that other companies need to follow …his techie rock star status was further enhanced by five years as CIO of the personal computer company, Dell.” And watching Randy on stage this morning I was reminded of this article and could easily see some elements of the rock star image. Yes, he made some bets alright, and for now looks like they are really paying off.

But today, there were more surprises in stall. As Ann ended her presentation featuring blades, and after she had shared how excited she now was in bringing mainframe-capable NonStop computing to a low cost industry standard blade package, she humbly apologized for Mark Hurd being unable to join the conference. There was an audible groan from the packed-house audience, and I stopped taking notes. But Ann soldiered on and began to respond to questions videotaped the night before.

“What about the commitment to HP-UX?” to which Ann responded “We love it and are committed and you should not be worried about HP’s commitment to Unix!”

More questions followed before someone asked “What about EDS!” And as Ann began to turn to the audience, from out of the curtain folds a strong voice boomed “Perhaps Ann, I should respond to that question!” and onto the stage walked Mark Hurd. The impact was immediate and cheering broke out. Mark’s answer was brief “for legal reasons I can’t get into too much detail but this will double our service capabilities and elevate us to “best in business’” after which he stepped off the stage. But more was to come.

The next question asked was whether HP believed Intel was committed to the Integrity product line when a new voice again responded “Perhaps Ann, a chip guy should help out on this matter!” and onto the stage walked Paul Otellini, the CEO of Intel. Paul quickly pointed out how, according to IDC, “Itanium is the fastest growing server platform in the world!” The picture at the top of this posting is of Ann, Paul, and Mark on stage - as with Paul’s entrance, Mark returned.

In a well-rehearsed sequence, the audience was able to hear from the CEO’s of two of the most dominant players in IT today and the impact from their presence stayed with the community for the remainder of the day. It was one of the most dramatic stagecraft “orchestration” I have ever seen and the audience was ecstatic!

It was clear, the Blades announcement was a really big deal, and HP wanted all attention focused on this breakthrough innovation, and even though no mention of Connect was made during the General Session, Mark Hurd met the night before with Nina Buick, Connect President, and wanted to know all about our new user community!

As the morning came to an end, for the ITUG community there was a brief break before everyone settled down for a NonStop Enterprise Division (NED) update at the ITUG Opening Session. This time Winston Prather and Randy Meyer would be presenting high-level roadmaps and giving us more information on the Integrity NonStop Blade Server. But before they took to the stage, we heard from the Scott Healy, the ITUG Chairman, and Margo Holen, the ITUG Vice Chairman for the time before last – there still will be an ITUG closing session, with the traditional Q&A, when 30 years of ITUG will come to an end. I have included a picture of Scott and Margo addressing the community.

You may recall from the blog posting last night how Scott was a little nostalgic, yet strongly believed the creation of Connect was the right thing to do – but for ten to fift 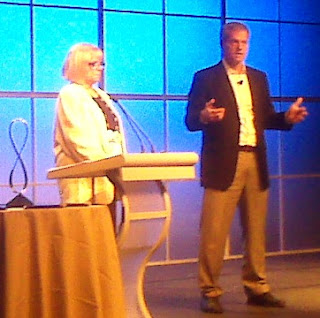 een minutes he and Margo turned back the clock and it felt like the old ITUG days. It is so sad to see that “the gig has ended!” Yes, Margo will now become Vice President of Connect and move to the Presidency in 2009, and Scott will complete the year as Immediate Past President, so a very strong ITUG voice will be heard on the board of Connect but after nearly 30 years of active engagement at all levels of the community and across many countries, it was still a sad day for many of us.

Winston Prather and Scott handed out the Availability Award. The finalists were Bank of Tokyo Mitsubishi UFJ Ltd.,BELGACOM, BV Zahlungssysteme GmbH., First Data Asia Pacific, MasterCard Worldwide, and VISA, Inc. Master Card won in 2004, 2005, and 2006. In 2007 VISA was the winner, and this year Master Card took the infinity statue again.

Scott and Margo maintained the ITUG heritage and spirit and recognized all those who helped make this event as successful as it was, and later, at the User Group party made sure the traditional user recognitions were made.

Randy Mott had made his bets in terms of data center transformation and Ann was clearly committing huge development resources to blades. I guess it was then no surprise that our ITUG community leaders were also making big bets. Perhaps it was just Las Vegas after all, and there was something in the air. But with each card being turned over, I could only see Aces appearing and I can only see a positive outcome develop. Scott and Margo certainly do have to be congratulated and while neither of them would ever consider themselves candidate rock stars – they certainly seem to be reading the community well and I can only add “let the good times roll!”
By Richard Buckle - June 18, 2008

Thanks as usual Richard for the interesting and thought provoking post. One question I am looking for clarity on is how exactly HP is positioning the new (well, not so new now) NSVA and NSAA servers against the availability offered by the previous S- and K-series servers. There's been talk of the NSVA servers not providing the same levels of hardware fault tolerance as the previous S-series servers, whilst on the other hand NSAA (particularly with TMR) provides a greatly increased level of hardware fault tolerance. And how do the new blades servers factor into this discussion? Are you able to comment on that?

There's been a lot of talk lately over the merits of the NSVA and now, with Blades as well, when compared to NSAA and even to the S-Series.

Without giving too much away, I plan on covering in a future blog but as a former Tandem product manager who was closely associated with the S-Series development, there were some concerns over the MIPS chips themselves and with making sure any processor-misfunctioning was caught.

But hardware today, at the processor level, is a different animal altogether and no, I don't see any less availability levels without the additional lock-step processor.

But I welcome other views on this topic as well.

Neoview "complexes" are not taking on OLTP - they are the data warehouse within HP. Other HP systems operating independently support transaction processing - as much as I would like to see that too on NonStop!

The connection between Neoview and traditional NonStop remaines the NonStop operating system itself. It was Winston Prather that highlighted Neoview as being another NonStop "application" and I agree. And a really big application at that!

There is only one operating system development team supporting the traditional NonStop user as well as the Neoview user - and this has to be good news for all NonStop users.

I believe the first post has a valid point - the NSVA servers do not provide the same level of hardware availability as the NSAA DMR (not to mention TMR). "Loose lock-stepping" HP introduced in NSAA significantly increased hardware availability - failure of one cpu chip does not bring a logical processor down while on the NSVA servers it does. Doesn't HP admit it by continuing with the NSAA series?

The story of NonStop was all about five nines of availability. And this has been maintained / retained in my opinion.

And the rest of the industry has a tough time trying to get anywhere that level of availability and as best as I can tell, without extensive awareness built right into the application, the other platforms really don't offer much help.

Now recently, HP added NSAA that pushed availability way past what the rest of the industry is even looking at - and took us to seven nines. This is just way out there for those corporations looking for something I candidly term "Permanent Availability" as recovery is so fast, can you even know you took an outage?

So, NSAA is a special case, while the rest of the NonStop product line does a terrific job of providing five nines and, as I recently found out from HP NED Product Management, continues to make significant investments in giving us five nines as they pursue less expensive platform options.