In the early daytime hours of Sunday, the hotel, casino, and convention center are all unexpectedly quiet. I awoke to brilliant blue skies – a feature of this time of year. And the heat! Yes, there are a few all-nighters playing the casino’s slot machines. And stragglers are wondering back into the lobbies from other venues on the famous Las Vegas Strip.

But the activity within the Exhibition Hall is frenetic, as the assembly-crews race to beat the clock for Monday’s opening reception. And the picture I have included here is just 24 hours after the one I included in last night’s post – I have been involved in a lot of exhibitions and each time I am amazed at how chaotic it all is right up to the opening of the doors. And nothing is any different this year – although I have to admit, some of the stands look even bigger than in previous years.

I sat at Starbuck’s underneath the moving escalators that take you up to the Luxor hotel and to the shopping arcade that connects it with the main casino. It is perhaps the quietest nook in the whole Mandalay Bay complex and a great place to just watch the continuous movement of people between venues. As it’s the weekend, most visitors are attracted to the outdoor beach complex that is a feature of the hotel. But by late Monday, there will be clear evidence that a user event is under way, with the numbers of vacationers beginning to be matched by the IT crowd. And the buzz that the event generates will quickly become apparent as the coffee shops, bars, and restaurants fill up with attendees and the serious side of networking begins.

For me, Tuesday’s general sessions will be the highlight! Not to say that Monday night’s Welcome Reception isn’t something I look forward to, as well. While there are many users who aren’t too keen on some of the clearly marketing activities that have become an integral part of the general sessions, I am far less bothered. Knowing what HP is planning to do, and where they are in their development cycles, is incredibly important. Yes, sometimes these sessions can go overboard – last year, gymnasts descended from the rafters and performed some spectacular stunts as part of the message of turning IT upside down – but hey, it’s HP’s time on the stage and I can go with it.

Last year, we heard from Mark Hurd and from Randy Mott. I found the presentation from Randy to be one of the best of the event’s, as he outlined the progress he was making with the “server-consolidation project” across HP. Randy made it very clear that he was working with a three year timeframe and, by my reckoning, he only has about six months to go so I am anticipating a pretty dramatic presentation this year. But I also suspect that the best presentation may come with announcements featuring the bladed architecture, and I will be most anxious to see what is actually unveiled on this topic!

Over the weekend, members of the incoming Connect Board of Directors had been meeting and, after a luncheon adjournment today, the separate boards then met. The phot 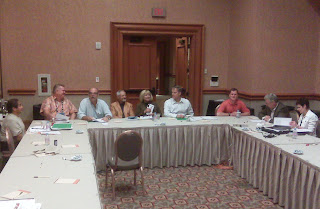 o I have included here is of the ITUG Board of Directors meeting for the last time. I can only predict good things emerging from the formation of the new group but, as a former ITUG Chairman with a lot of history with ITUG, and with very fond memories of all the folks I have worked with, I have to admit that I experience mixed emotions. But again, I truly believe that this is the right thing to do and the best way to represent all HP users!

And the message I took away from this was not one of an ending, but of recognition. And not so much about a beginning either, as the different organizations had been cooperating for some time, but of reconciliation. I have always been a firm believer that the user community must take the initiative and to visibly demonstrate to the primary vendor, HP, that a strong user community is at the core of all parties interests!

This evening, Nina Buik the incoming President of Connect and the former President of Encompass, held a small reception for current user group board members and their spouses. After the usual small talk, conversations quickly turned to expectations for the coming week. “I see the potential for exponential growth of Connect! And why?” she went on to say “this will happen because the larger chapters will be the first to see the value from a worldwide community - led by advocacy.” As I took in her observation, she went on to explain “advocacy, with a global reach will be part of everything we do and it’s power to influence HP will be derived from the strength of its numbers. The big chapters see this immediately and as they become affiliated with Connect, the smaller chapters will follow.

When I asked Nina about her expectations for the HP general sessions, and what will be said, she expressed a real desire to see Mark Hurd, as HP’s leader, “simply state that he is aware, as are all of his team, and that they are all fully supportive, of the user community and it’s newly created board, and that he directs such a message as much to HP folks as to the user community.”

And this is why we come. It’s not really to enjoy the clear blue skies over Mandalay Bay or to spend time on the beach. The famous nightlife and the casinos are not the attraction either. But there are only a few opportunities each year to hear from HP executives and for me, this is the highlight! This is what provides me with material for months to come! And this is what brings me back each year. And for many of us, it will not be the heat of the day that will hold our interest – but the heat generated from the excitement surrounding the event itself!
By Richard Buckle - June 15, 2008

I am guessing he meant "quiet" as in no sound.

Excellent observations, Richard - glad to see you're online and keeping people thinking! A poignant moment indeed, viewing the photo of the ITUG board, and thinking of so many event openings... pleased to see the beginning of 'new beginnings'.

Thanks for picking the "typo" - I corrected it ... sometimes the spellcheckers can be a problem in the early morning hours!