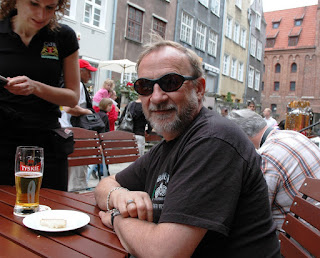 Readers of this blog will recall that, in my last post I was aboard a cruise ship anchored in St Petersburg under overcast skies, and not all that enthusiastic about going ashore. There was a sense of moodiness, almost indifference about the city, and walking through its parks and visiting its historic mansions was no longer the priority it had once been. The following day, just after I had posted to the blog, the sun finally came out and we took a tour of the chateaus of the former Czars.

There have been many generations living in the city created by Peter the Great – many more following the rise of the Bolsheviks. The present generation, still reeling from the break-up of the former Soviet Union and a little uncomfortable with their position in the new world order, proved to be somewhat indifferent to visitors. Tolerating them, up to a point, and their cash, but not really welcoming them.

St Petersburg had been built as the Venice of the North – with canals and bridges evident with every turn as we motored across the city. It was interesting to learn of how this new Venice suffered flooding almost as routinely as its Italian cousin. Storms that lashed the Gulf of Finland would frequently push the sea deep inland and the rising waters would simply flood the city. But apart from having canals, there was little else to remind a traveler of the legendary city of Marco Polo! That evening the ship pulled out of the port and headed into the Gulf of Finland, and I kept thinking of the turbulent times that had engulfed generations of St Petersburg’s citizens, and of how much work still needed to be done before anyone could really consider the city as grand a place as Rome or Paris.

And I was leaving with the sense that the residents were in no hurry at all to develop the city further to better reflect the aspirations of a new generation of citizens – a circumstance that didn’t feel right to me as I watched the terminal fall away. Our Russian guide, in his last comments to us before we left the bus, explained how the changes brought about by “perestroika” were perceived very differently by the elderly than by the cities youth and even those of middle age: the government-controlled economy, with its free education and miserable, but free, health-care was suddenly no longer! And the older folks had no time to “retool” while the young ones felt utterly lost. The middle-age group figured out very quickly that corruption was now a part of the new system, and seemed to be coping! I wondered if ages of oppression conditioned the people to actually be confused when there was no strong-man ruling.

The medieval town of Tallinn, Estonia, was our next stop and what a contrast! Coming so soon after leaving St Petersburg, it gave us the opportunity to meet folks who were genuinely pleased to see us! Back in 2007, Estonia was subject to one of the first Denial of Services attacks apparently coming from a foreign country. “Cyber-warfare on an unprecedented scale has hammered Estonian web sites for the last two weeks in the aftermath of the government's controversial decision to relocate a Soviet-era war monument from the center of Tallinn to the suburbs,” was how one paper I read reported the incident. As we continued to explore Tallinn, and spent a short time with the locals, the changes younger generations were bringing about were very apparent.

While in some countries there maybe a reluctance to accommodate change, other communities, separated by only a few hundred miles, shrugged off what had happened in the past and quickly embraced completely new lifestyles. Hot dog stands, coffee shops, and displays of expensive running shoes were all in evidence among those communities in transition. And they derived a lot pride from what they had achieved.

For the past week I have been engaged in an exchange with the participants on the LinkedIn user group, Real Time View. I posted a discussion topic “Does Data Base benefit from NonStop? Or does NonStop benefit from Data Base?” and it generated considerable commentary. While I am not going to go over the same ground – and readers can check out the comments already posted – or even discuss the state of data bases on NonStop, what I have been thinking about is whether we should be even more concerned about the future of NonStop?

Is my appreciation for what NonStop can do, and my understanding of where it can play a role, purely a rose-tinted glasses, “legacy,” thing? Is my way of thinking mired in the way NonStop was used in the past? Is it time we look anew at NonStop, and put some distance between how it could be used today and what it used to do in the past? And if we do not successfully identify new roles for NonStop, does this necessarily mean that NonStop is no longer needed?

Walking through the Baltic port cities, lattes in hand, and observing how not every generation was reacting in the same way or with the same levels of enthusiasm, made me wonder what will become of NonStop. There is a small cadre of supporters around the world that continue to extol the virtues of NonStop – but who among the next generation recognizes the value that comes from a server that continues to run as hardware and software components fail?

Recently, I had heard of the lengths some users go to in order to ensure key business data will be available, and how clusters of clusters are assembled to address the problem. The network interconnecting the clusters is weighed down by enormous volumes of data flooding into the network’s pipes. And the architects are really impressed with what they can achieve using low-cost commodity servers. I sense the pride these technicians have in what they have achieved for a minimal initial outlay.

And then it all breaks! One solution I was made aware of this week and that is actively marketed, simply throws away data in times of stress so that it can catch up - leaving it to later audits, I have to assume, to uncover the loss and undertake corrective measures. There’s no apparent downtime, but the integrity of the data during those times of stress has been completely compromised. And it didn’t appear to bother the architects who were relying on this solution.

Future generations of IT professionals may view technologies like NonStop as legacy, and proprietary, unless today’s IT professionals become a lot more proactive in promoting the value proposition of NonStop. In my previous posting I made the observation of how “today, the emergence of cloud computing is once again opening the doors for NonStop with its strong transactional processing characteristics.”

And since making that observation, I really do believe that the next generation of IT professionals needs to rethink the technology they select as the access point, or gateway, into the cloud. I find it rather ironic that the very server that provided so much value to financial services for so many years, as a gateway between financial devices such as ATMs and POSs, with the back end application and data base servers, is so rarely considered today as a gateway into the Cloud! And yet it is as if the stars are all aligning, once again, behind the perfect fit for NonStop in the new world.

Cloud computing, as currently proposed by the majors - HP, IBM, Sun, Oracle – is being viewed as potentially the dominant technology of the next ten to fifteen years. According to a recent InformationWeek article, IBM was quoted as saying that “the cloud market will grow to $66 billion by 2012” adding that it’s being driven by the affordability it offers. But if it becomes an unreliable technology prone to security breaches and information theft, for instance, its take-up in the commercial realm may become less than stellar. NonStop as a gateway, as an access appliance if you like, makes a lot of sense and should be a consideration by every next-generation IT professional.

As I moved down the Baltic and into Poland and the former East Germany, memorials to Solidarity and to the fall of the Berlin Wall could be easily found. The past was a constant reminder of how far these country’s citizens had come – but even as I spent time viewing some of the better-known sites (the gates to the shipyards in Gdansk, for instance) I overheard one teenager ask “what is Solidarity?” The generation-after-next appears to be even less aware of what laid the foundation for their new prosperity than the generation just coming of age.

Could we be participants in a future “Technology Event” only to hear someone ask “what is NonStop? What is Tandem?” And unless those now entering the IT profession really do see the value in using NonStop in new ways, this may become a reality! I closed my last posting to this blog with a final observation, but it’s worth repeating here “perhaps, for NonStop, a new role will develop as well, only this time the marketplace may be a lot more universal than anything encountered before.”

The final irony with change, and with what we see being embraced by newer generations of IT professionals, is that there really aren’t all that many new requirements. Even with today’s Cloud Computing, many would argue that it is just Time Sharing of the late ‘60s revisited. Or Service Bureaus, of the ‘70s and ‘80s! Or Application Service Providers, of the late ‘90s! Let’s hope that there’s sufficient “critical-mass enthusiasm” to ensure NonStop does not miss being discovered by a new generation!
By Richard Buckle - July 25, 2009

As our friend Dr. Bill Highleyman is so quick to report, Google and others who have been so enamored with the cloud, they forget customers like and want availability.
NonStop would be a fabulous front end to the cloud. I keep expecting to see it in the flesh.
Jimbo