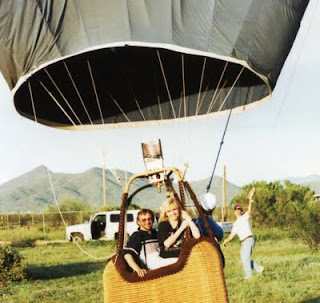 Many external conditions influence the direction we take. Often it is simply something we have seen in the media or have overhead in a coffee shop. Other times, it’s just a situation or circumstance we may unexpectedly recall. The picture I have included here is from a few years back when NonStop solution architect Gary Stevens arranged for his son to take Margo, Brad Poole, and myself on a hot air balloon flight over Phoenix, Arizona.

This picture reminded me of how the simplest elements can change the direction we are taking. The slightest breath of air can easily push a balloon off course. I always thought landing a balloon would be problematic and so it was with this flight – coming down, as we did, alongside an Ostrich farm during the commercially important egg-laying season! Not a happy farmer.

Closer to ground-level, every little bump and pothole can deflect us from our desired path. While I am ignorant of all that goes into the maintenance of a hot air balloon (and I have to assume that they are far from “maintenance free”), I am a bit better informed when it comes to cars and these days I seem to be spending a lot of time at the service center of the local car dealer. Maintaining cars not only for daily use, but for occasional time at the track as well (under the eyes of expert tutors of course), seems to have increased the frequency of these visits. And on the most recent trip to the shop, I caught up with a good friend who was having a wheel alignment done.

In daily driving, particularly on the freeways of Southern California, the conditions are anything but helpful when it comes to keeping a car’s wheels pointed straight ahead. Even with 65 mph speed limits posted, running over any potholes or roadside junk, can change a wheels alignment by just a few tenths of an inch. But it’s enough – the car looses its ability to go as straight as it may have earlier, and tires begin to deteriorate.

In the case of my friend Brian (and fellow Corvette driver – yes, it’s red!), he was adjusting the angle of the front wheels, adding a little more negative camber. On the big banked-track in Fontana that once a year we share with NASCAR, the car will have more “bite” and turn in more aggressively. And the ever-so-slight change from 1.5 degrees, 2.0 degrees, of negative camber may appear to be very small and probably not even noticeable, this adjustment will make a significant difference to how his car would handle at speed. But it’s all about “hot laps” and for Brian and his red ‘Vette, these ever-so-small adjustments are very important!

Just as the wind can change the course of a hot air balloon with only the gentlest of puffs, so too can the slightest change in angles influence the line a car will take through a corner. External conditions influence so much we do and no matter how small or inconsequential they may appear to be, we are often surprised with the outcome. And so it is with me that, as I paged through the pile of magazines stacked on my desk, I caught the last column of Patrick Bedard, a contributor to the magazine Car and Driver.

Bedard had been providing commentary for more than forty years, and in his last column observed how “time passes, and along with it the urge for hot laps (and), in today’s lingo, I’ve moved on.” The rest of his column reflects on how he never envisaged the complete reversal (of fortune) that’s taken place in the auto industry. But it’s his last comment that caught my eye. “Hey, I’m not the official cheering section of the 130-some-year-old internal-combustion engine. My loyalty is to what works.”

Readers of this blog, and of the discussions I post to the LinkedIn user group, Real Time View, will have seen how I was looking at what comes next for NonStop. I have become a little uncomfortable with NonStop not quite succeeding in reinventing itself. But, then again, and to paraphrase Bedard then perhaps I’m not the official cheering section for the 30-some-year-old NonStop platform. And perhaps my loyalty is to what works!

When it comes to what’s next for NonStop, I recently wrote in the eNewsletter Tandemworld “in talking with a number of ISVs looking into building product for the cloud, the number of times NonStop has come up is beginning to make an impression. No, none of them as best as I can tell, is prototyping a NonStop server under the product banner of ‘Silver Lining’ no matter how tempted they may be! But if ISVs are talking NonStop – somewhere out in the IT user landscape, smart architects must be giving some thought to the possibility.” In writing this, I was thinking of how quickly markets can turn around – how a gentle puff of wind, a well-placed success story, could so easily nudge NonStop into a completely new and more broadly-followed marketplace.

Big changes triggered by a single story are not unknown in our industry. In the Tandemworld article I continued with the thought that all it may take would be for “a highly publicized success story to appear in any trade publication (and) the rest of the CIO / CTO community quickly follows. And should that situation arise, and momentum builds, then we just may see the development of a new product lifecycle where NonStop begins to rapidly ‘take-off’ that more than compensates for any tapering we see with existing product lifecycles.” In developing this thought, I recognized how seductive a good story can be – in today’s risk-averse economy, fiscally-conservative CIOs are even more reluctant to “gamble” on anything unproven than before.

But hey, when something works and generates excitement, the situation can be turned around pretty quickly. Traditional product and technology lifecycles may not tell the full story, should a product be able to leap from one curve to another. And this led to my last observation in Tandemworld where I revisited HP’s success with Blades, and of how it’s “a long-shot still – but definitely something to keep an eye out for and who knows, potentially something many of us familiar with NonStop will have no trouble accommodating in our data center. Returning to the comment about the success HP is having with NonStop on Blades – in many data centers, the CIO / CTO crowd may not even be able to identify the NonStop servers present in the BladeSystem!”

I am not only a reader of car magazines, as I do find time to check out business and IT publications as well. In the June 22nd ’09 issue of InformationWeek, Bob Evens a senior VP of InformationWeek, wrote of how the new Coca Cola “Freestyle” drink dispensers is a case study on how “companies can imagine fresh new approaches and processes that give customers more choices while simultaneously driving more actionable knowledge back to headquarters.”

In other words, with such a minimal change as adding a chip, and a communications link, the old-style Coke dispenser became a new product addressing the needs of an entirely new marketplace. What Evens suggested was that Coke had produced a product that was “truly (a) transformative device that shift(ed) more customization and product-creation power from the seller to the buyer.” Innovation doesn't have to always be revolutionary - sometimes it is the little adjustments, the small additions, that lead to the creation of a product that simply confounds the pundits!

And what I find so tantalizing with the advent of cloud computing, is that it presents an opportunity for NonStop that is little different to what NonStop was called upon to do with the advent of ATM and POS networks – meeting the need for an “always on” gateway to the data center! Penetrating this new and exciting marketplace calls for such a small change. The tiniest of course corrections!

NonStop has already shown how it can accommodate small changes – in the late 90s and with the advent of the web, commercially as well as socially, NonStop sales benefited as the likes of Sabre, AOL, and even a key PC producer entrusted their business to NonStop. At that time, the NonStop fundamentals really shined and it seemed to be a good fit for the technology. And deal by deal, NonStop gained a foothold in the eCommerce marketplace.

As I listen today as other ISVs discuss clustering, and the use of redundant processors and controllers, and about all the code and procedures required to ensure reasonable (and maintainable) uptime levels, the “elegance” of the NonStop approach is inescapable. It just works! And if NonStop gains even a small toehold in cloud computing, case studies will emerge that open the eyes of many of today’s risk-averse CIO’s. And there may just be enough wind to blow NonStop into new marketplaces. I am not a champion of the brand NonStop as I am passionate about the need to solve a problem it so easily solves. Again, it just works!

Coca Cola didn’t change the product all that much – from outside, the “box” still looks much the same. And it’s red. Brian didn’t change all that much with the alignment of his Corvette – it looks the same on the outside. And yes, it’s still red too! Perhaps it will be the little changes to NonStop, and to how it is used in the future as we see continuing interest in gateways and in simplifying / securing access that attracts the bright lights again. And who knows, future packages of NonStop, too, may be red!
By Richard Buckle - July 31, 2009